SUMMONER ~ BEYOND THE REALM OF LIGHT .... review

Boston's Summoner seemed to tap into something when they decided to change their name from Riff Cannon to its current title, why this is no one knows but it appeared to spur the band on to greater heights and saw them releasing two stunningly good albums in 2012's "Phoenix" and 2013's "Atlantian" both of which were warmly embraced by the underground press and fans alike
.The band are now back to entertain and amaze with their third album "Beyond The Realm Of Light" (Magnetic Eye Records). 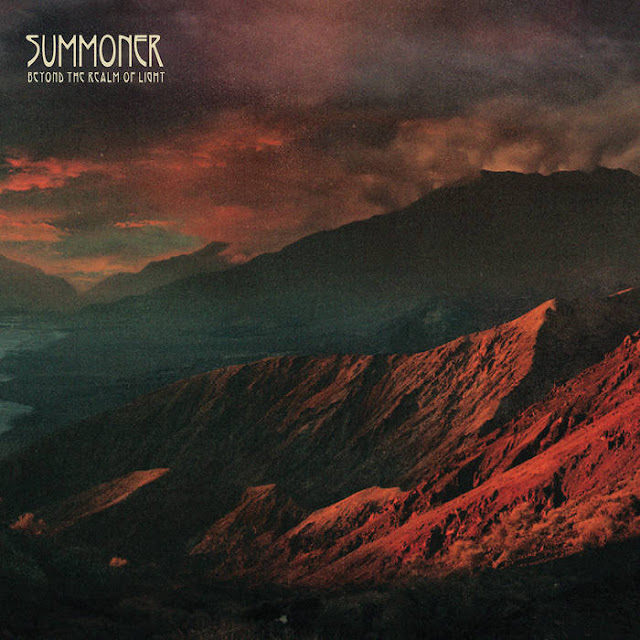 So what do you get for your money this time around? Well nothing much as changed, Summoner are still slaying all before them with their addictive grooves of molten metallic stoner, still blending heavily fuzzed and distorted riffage with intense vocal melodies and still managing to sound fresh and vital. If there is something new to be found in Summoner's sonic attack it is that there is a little more focus, a touch more musicality and a stronger emphasis on arrangement to be found in their highly addictive sound. Songs like. the gloriously rifftastic. "The Huntress", the melancholy and prog-ish. "The Emptiness" and the epic and atmospheric closing track "Into Oblivion", although still retaining the intensity and drive of  previous work are imbued with a newly found sense of adventure and experimentation, the band unafraid to go out on a limb on occasions, flexing their musical muscles, going off on a tangent here and there but never losing sight of the groove.
If you enjoyed "Phoenix" and "Atlantian" then your gonna love "Beyond The Realm Of Light", it's like someone buying you your favourite pizza opening the box and finding its got extra topping.
Check it out ....