Ireland's Between The Lines description of themselves as "a diverse rock and heavy band from Galway exploring light and darkness", is one that is hard not to agree with, the bands blend of alt/grunge and heavy psych/stoner dynamics textured with post-rock complexity is a groove that most certainly has one foot in the shadows and the other in the sunlight, as can be witnessed on the bands self-tiled album "Between The Lines". 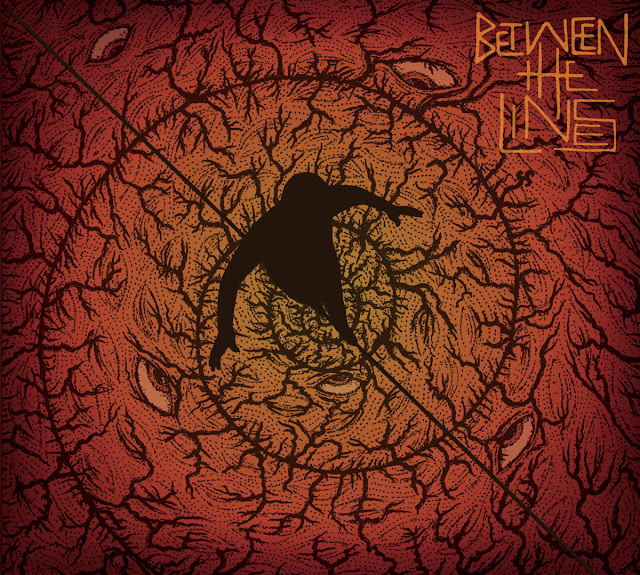 First track "Rumour" begins sparse and atmospheric with shimmering percussion, liquid bass and guitar arpeggios gently supporting a wordless choral melody before a circular fuzzed refrain appears slowly growing in volume until the rest of the band join in and the song takes off into a gritty hard rocking stoner groove that shifts up and down through a series differing riff fuelled dynamics coated in strong clean and effective vocals.
"All Free" is next up and jams a rolling guitar refrain backed by a massive drum and bass backdrop enhanced with clever touches of lead guitar colouring that erupts from the speakers with feral furiosity that only lets up when the vocalist finally bringing things to a close on the poignant and unaccompanied vocal line "You will"
"Sands of Time" sees Between The Lines embracing their prog-ish ,post-rock side while at the same time sprinkling elements of doom and space into the proceedings. Startling and atmospheric it's a fine example of a band who are not prepared to just live and die by the ferocity of their riffage but one who want/need to stretch out into other areas and are unafraid to do so.
"For Your Sanity" finds the band blending into their heavily fuzzed post-rock grooves a touch of alt/grunge dynamics, weaving them around truly stunning vocal melodies and harmonies underpinned by thunderous rhythmic backdrops and taken to another level by swirling guitar motifs and crunching riffage.
"Southern Steel" follows, it's crunching chords and swirling guitar motif's, delivered over a foundation of grizzled low bass and tribalistic percussion, are drenched in  a swathe of gnarly eastern promise into which a mix of gritty and smooth vocal tones and harmonies are expertly woven.
"Shellshock" sees Between The Lines changing tack slightly and heading in a  more stoner/hard rock direction albeit one informed by a darker more post-rock approach..
Lastly comes "Sleep" a song that sees Between The Lines once again dipping their toes into the waters of eastern mysticism. The song builds layer by layer with gently swept arpeggios, sitar-like guitar effects and intricate bass and drum rhythms supporting a smooth mellow clean vocal, the song gradually building momentum bothy musically and vocally until exploding into gnarled heavy psych groove in the last quarter and then fading out in the same sparse and atmospheric fashion the band used to open the album.
Melodic, metallic and marvellous "Between The Lines" is an album that deserves to be heard outside of the niche sometimes "insular" market of the rock underground, this is music and sound that has the potential to appeal to much wider audience, whether that will happen or not only time will tell.
Check it out ......