Brazil's Dead Level are a bit of an anomaly among the current crop of South American underground bands currently making waves outside of their homeland, the five piece band, consisting of Uirá Seidl (vocals), Leo Venturieri (lead guitar), Aramys Souza (rhythm guitar), Paulo Siqueira (bass) and Alan Sampaio (drums), take their influences not only from the usual hard rock/metal gene pool but also from the more raucous grooves of the punk and garage scene, The band then confound things even further by throwing in a little hip hop colouring and rock/pop commerciality creating a sound that is slightly schizophrenic but highly enjoyable, a sound that can be heard on the bands self titled debut EP "Dead Level" 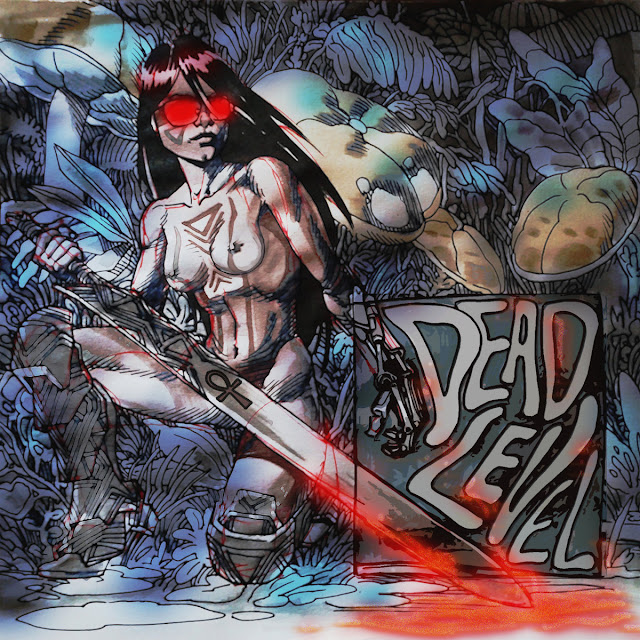 "Hellcome" opens Dead Level's account, an instrumental that sees Souza laying down a heavily fuzzed refrain supported by Siqueira's grizzled bass lines and Sampaio's cymbal dominated percussion over which Venturieri lays soaring lead guitar colouring, gradually building his solo's up layer by glorious howling layer.
"Dead Level" follows and builds from a deliciously grainy and distorted  Siqueira bass riff, that is then joined by Sampaio's shimmering percussion, into a gnarly off-kilter stoner groove that introduces Uirá Seidl 's vocals for the first time. Seidl's voice adds a whole new dimension to Dead Level's overall sound his big voice, slightly accented with a penchant for rap style phrasing, roars, shouts and f-bombs all over the songs mix of eerily occult and slightly warped doom-like grooves, spitting out his lyrics like a lay preacher in bondage trousers.
"Cut The Crap" sees Souza chopping out fuzz drenched chords that splutter and stutter just above Siqueira and Sampaio's equally stuttering backdrop of rhythmic groove, the bassist and drummer locking in tight and laying down a bedrock of stop/start groove that as an almost hip hop metre to its delivery. Over this plethora of fractured rhythms and refrains Seidl serves up a vocal that mixes rap-like angst with cool mellow melodies which Venturieri compliments with curly little blues licks and solos.
"Birmingham Road" finds Dead Level mixing things up a little with mellow crisp, clean pop/rock vocal melodies sang over a rather laid back rock groove occasionally broken up by a circular refrain and overlaid with a swirling, seemingly,ever-present guitar solo. Slightly more commercial sounding than the previous three tracks it nevertheless shows there is more than one side to this band. 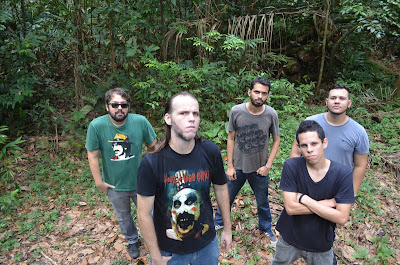 Dead Level are not the finished article quite yet but this EP shows there is enough  potential here to make it worth checking them out.....