Lincoln, Nebraska's Trillion Ton Beryllium Ships first came to Desert Psychlist's attention earlier this year via their debut album "TTBS" a devilishly delicious collection of low slow and heavy grooves decorated in (surprisingly for this genre) clean clear vocals. Not a band to sit about twiddling their thumbs when, in their words, there is some "existential pondering" still to be done the band, Jeremy Warner (guitar, vocals); Justin Kamal (drums) and Karlin Warner (bass) soon set about writing and recording new songs. Those songs are now finished and have had all the rough edges sanded off, and some added, and appear on the bands latest EP "Rosalee, we think you'll like it. 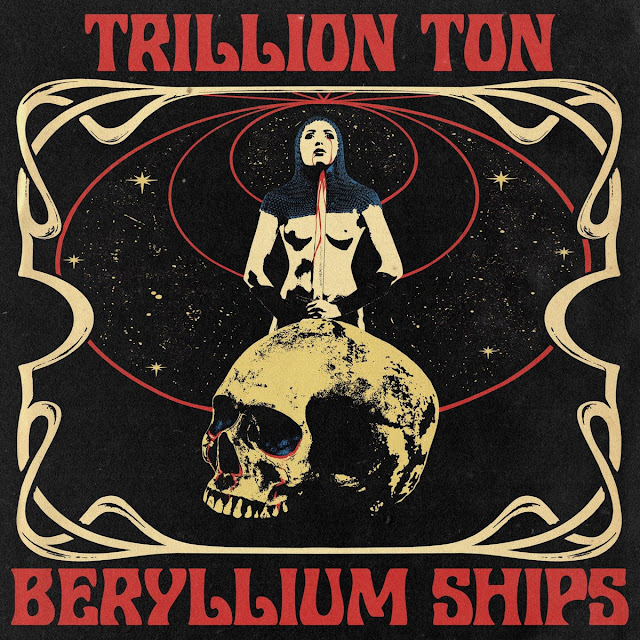 TTBS's new EP begins with "Core Fragment" a song that unusually jumps, after a very brief flurry of  thunderous percussion, immediately into the vocals, now we think Jeremy Warner will be the first to admit that his vocal delivery is not exactly what you would call rock god powerful but his clean low key vocal approach and melodic tones are very effective and work as a nice counterbalance to the sedately paced heavy rhythms and refrains that accompany them and at times even threaten to drown them out. "Destroyer Hearts" follows, a song steeped in dank dark doominosity that routinely builds towards a crescendo only to then dissipate into a swampy murky meander, rising and falling in this fashion throughout its duration driven by some thunderously impressive drumming from Kamal while "URTH Anachoic" takes low slow and heavy to a whole new level of ponderous and boasts a slightly weird but totally effective vocal meter. Title track "Rosalee" sees the band sign out with a deliciously dank sixteen minute plus instrumental anchored to the earth by Karlin Warner's deep thrumming bass it is also strangely the first and only song on the EP that guitarist Jeremy Warner gets to cut free and unleash the full potential of his guitar playing chops, his searing lead work in the songs last quarter taking the songs dynamic out of the realms of stoner doom and into more lysergic territory. 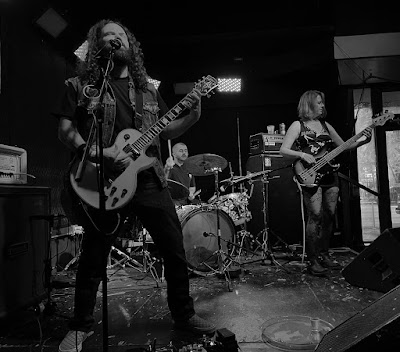 "Exploring the claustrophobic void of space" is how Trillion Ton Beryllium Ships describe their music making process and there is very much a claustrophobic element to much of what goes down on  their latest EP "Rosalee". The trio create a groove and sound that feels  more like an implosion than it is does an explosion, the bands low slung riffs and rhythms collide and crash into one another like matter falling into a gaping black hole, their grooves slowly gathering in mass until collapsing in on themselves under the immensity of their own weight, Jeremy Warner's clean melodic vocals the last pinpoint of light in the all consuming darkness, or to put it another way... some damn heavy shit!
Check it out ....
© 2021 Frazer Jones
Posted by Desert Psychlist at 06:24