A year ago Desert Psychlist penned a few words on Indianapolis, Indiana band Ancient Days Bandcamp page, regarding their album "Black Magic Nights", we stated that we dug the albums heavy doomic bias but found it  "a little generic and Hammer House of Horrors" in places. Whether our little blurb went down well with the band we never found out but over the last year there has certainly been somewhat of a sea change in the bands approach to their music. On their latest album "Sign of the Times" they have seemingly jettisoned the more stoner doomic aspects of their sound and embraced a more expansive dynamic, a dynamic that is still very much within the canon of doom but also encompasses elements of old school classic rock and heavy metal. 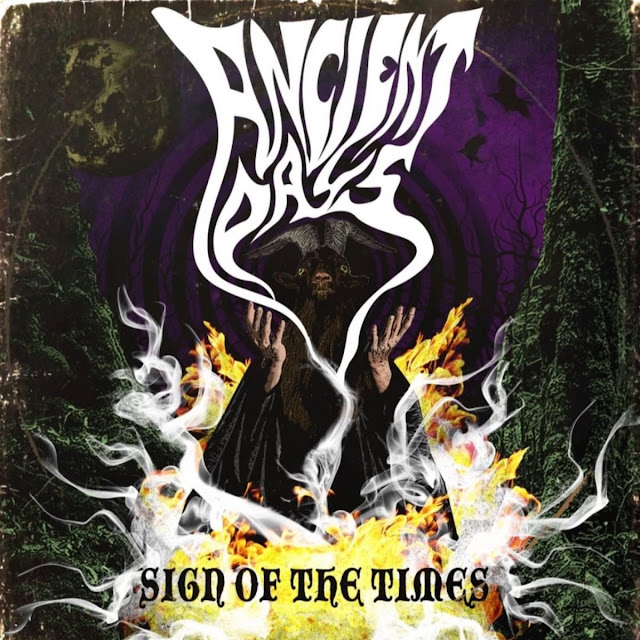 Ominous swathes of organ combined with spoken narrative opens first track "Intro/White Smoke" then segues into a groove built around what sounds like Native American rhythms, Derek Fletcher's voice, aided with a little echo, soars above Jake Dwiggins tribal beats and Brian Yates' liquid bass lines in tones strong and powerful Alex Wangombe's keys, comping just beneath the vocal, giving the song an extra dimension of depth and texture, Papillon Burkett who up until now has been content to lay down crunching chord progressions and tasty licks unleashes a scorching feel drenched solo at the three quarter mark to take things to the close. "Uncle Acid" is up next and literally prances out of the speakers on a riff you'll be remembering long after its last note has faded into the void while "Black Shadows" proves there is still doom running through this bands veins but only this time that doom has a more traditional flavour. The doom continues to flow through next track "The Conjuring" an atmospheric number made even more atmospheric by Wangombe's cathedral sounding keyboards, the song also highlights the bands new found confidence in their own abilities by suddenly shifting up the gears and finishing on a rampant heavy psych wig-out. The first part of "Welcome To Hell" could almost be called a "boogie" its strident up-tempo groove, periodically interrupted by an ear catching guitar motif, is full on and in your face and is accompanied by a superb Fletcher vocal but as we learnt in the last song this is a band who have now thrown off the shackles and are unafraid to take chances and so for the second half of the song the band launch into a blistering instrumental jam that finds Burkett throwing every guitar trick and lick he has ever learned into the ring to great effect. There is a slight return to old ways with "Trail of Serpent", a song that also features producer Kamaron Lockwood on guitar, but do not worry because although there are parts to this piece that are low slow and damn heavy those parts are countered by an almost Doors-ish dynamic sitting beneath a powerful lay preacher like vocal. Desert Psychlist has no idea if Ancient Days are familiar with the UK's low- budget sci-fi TV franchise DR, WHO but the opening riff to next track "Night Witches" is very reminiscent of that shows theme tune, that aside the song is one that undulates between traditional doom and its more galloping proto cousin and boasts an absolutely mind-blowing solo from Burkett. All good things have to come to an end and with "The Devil Made Me Do It" Ancient Days end this good thing with an absolute banger, an atmospheric lament decorated in a superb Fletcher vocal and  underpinned by Yates' booming bass and Dwiggins solid tight percussion,  the song is given further depth and gravitas by Wangombe utilising both piano and organ to give the song added  texture while Burkett peels off searing emotion drenched solos. 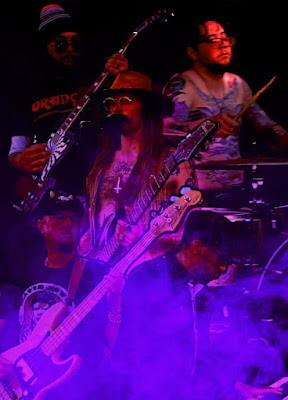 With "Sign of the Times" Ancient Days  may have, with the exception of Green Lung's excellent "Black Harvest", made one of the best keyboard drenched doom flavoured albums of the year. The slow. low and heavy grooves of the bands previous output were always a pleasurable listen but you were often left with the feeling that they were missing that vital element that could give their grooves the wings they needed to really fly. That element, whatever it was, has thankfully been found and with "Sign of the Times" Ancient Days have transformed their sound from what were once leaden trudges across dank mires into boundless gallops through sun dappled forests.
Check it out ....
© 2021 Frazer Jones
Posted by Desert Psychlist at 14:17