Let's get one thing straight right from the get go and that is that what you are about to hear, after reading this review and then pressing play on the selected track at the bottom of this post, is not always an easy listen neither is it a release blessed with a highly polished production, in fact this release from British Colombian three piece Vulcanodon Phazer is at times murky, muddy and a little messy. Now you might be thinking that the previous sentence is an odd way to begin a review, especially when Desert Psychlist has a reputation for only reviewing those albums and EP's we really dig, and it is but it is also a way of preparing the prospective listener for something a little different from what they might be expecting, something that is a little left of field, dissonant and raw but something that is quite brilliant because of that, so with this in mind let us introduce you to Vulcanoden Phazer's third album "Lemurian Thunder" (Bud Metal Records) an uncompromising blend of mind-blowing space rock, lysergic sludge and dank discordant doom. 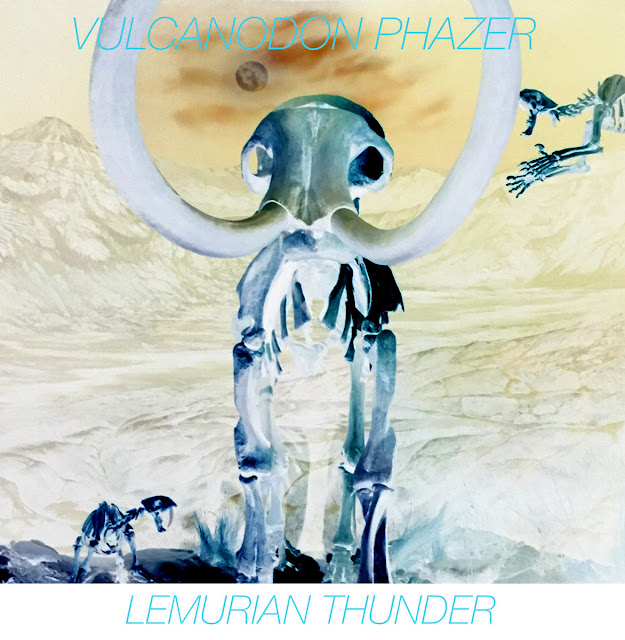 Dark repetitive riffs played over a mixture of shimmering and insistent percussion is probably the best way to describe opening track "Fossils In The Dark", a song that relies on the crunch of its guitars for its rhythmic attack far more than it does on its drums and is decorated in a weird but captivating vocal harmonies that are more disharmonious than they are harmonious, like we said in our opening intro this is not an easy listen. Things do however get slightly a little more, what you might call traditional, with title track "Lemurian Thunder" but this is probably more because its chugging space rock groove sits a little easier on the ear as does its Hawkwind-esque vocals, but like everything on this album those twin elements of chaos and mayhem are never far away and here they present themselves in some truly insane guitar work. Following track "Human Beams" finds our heroes jamming a groove that could almost be described as gothic and funky if it were not for the ever present dissonance that sits just beneath its vocals that spout sci-fi influenced lyrics in unconventional meters. "The Telechine Way" sees the band once again strutting their stuff in space rock territory while "Chiba" finds them mixing their doom with their sludge and sprinkling some lysergic spaciness into the proceeding along the way. Final song "I Pledge Allegiance to Our Alien Robot Gods" is an instrumental blend of droning doom and heavy psych that utilises the unusual ploy of keeping the guitar riffs at a fairly constant pace while the drums slowly increase in tempo before then signing out on an abrupt full stop, it is probably our lest favourite song on the album simply because it lacks the chaos of the previous five but then this being an album where you have to expect the unexpected we suppose that signing out on something a little less than chaotic is exactly what we should expect, if that makes sense. 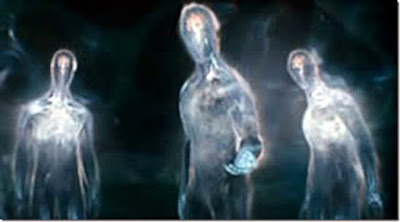 There are those out there who will describe what Vulcanodon Phazer do on "Lemurian Thunder" as just noise but then some describe free-jazz in those same terms, of course we are not trying to equate what these Canadians do with jazz but there is a similar feeling of organised chaos going on here that was also a factor in the music of Ornette Coleman and later period  John Coltrane. The trick to listening to music that has an air of dissonance and discord attached to it is to allow your ear  to focus on something familiar to you within that music and then let everything else sort of fall into place around that, and if you do that with "Lemurian Thunder" you just might find, like us, that you mind will get well and truly blown.
Check it out ...
© 2021 Frazer Jones
Posted by Desert Psychlist at 05:19