Lorena Rocha (vocals/guitar); Rafaum Costa (guitar/vocals); Thassio Martins (bass) and Fred Nunes (drums) are Black Witch, a Brazilian quartet who have graced the pages of Desert Psychlist on a number of occasions first with their debut EP "Aware" and then again with their first full album "Solve et Coagula". This year (2021) the band have been very busy and graced their fans with two releases the first a three song EP entitled "Spiral The I" (released in July and which we described, on their Bandcamp page, as "three tracks of dank dark doomic splendour delivered in their own unique signature sound" and the second "Spiral II", a four track slice of witchy doom blessed once again with that unique Black Witch sound. 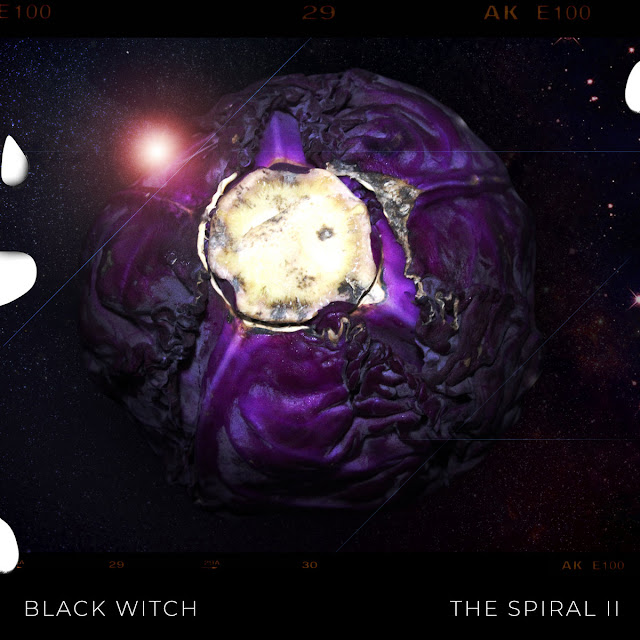 "Scuzzy" is a word Desert Psychlist has seen twice associated with "The Spiral II" and it is a description perfectly fitted to Black Witch's gnarly, filth drenched guitar and bass refrains and  thundering rhythms and it is a description that is given further credence by the vocals that accompany those refrains and rhythms. Lorena Rocha has a unique and distinctive singing voice her vocals are part ethereal and elfin and part sinister and witchy and are a perfect fit for the gnarly assed backdrop of traditional and proto-doom grooves Costa, Martins and Nunes provide for her voice to decorate. . There is a touch of Dutch occultists The Devil's Blood about where Black Witch are at these days only a tad more grimy and (of course) "scuzzy" and minus the satanic lyrical content, this is no more evident than on opening track "Calling Me" a song built around a dark Alice In Chains style slurring  riff that is driven by thunderous and inventive drumming and over which Rocha intones cryptic lyrics in distinctive tones. "I'm pleasure but I'm also a prison" sings Rocha on the excellent "Come Again", her warning given further gravitas by the dank doomic grooves that provide the backdrop to her confessions., grooves that are Sabbath-esque in feel but not in an obvious way. Any doomic outfit worth its weight in despair will these days throw a few dramatic sound-FX into the mix to ramp up the atmospherics and Black Witch are no exception and so "Chasing" begins its life to the sound of rainfall and thunder underpinned by a sedate bass motif and a high pitched droning effect, the band then dropping into a low, slow and heavy doomic groove around which vitriolic tinted lyrics describing the human race as being "made of dust and sperm and salt" in sinister  but nevertheless melodic tones. For final track "Besides It All" Black Witch add a little cosmic spiciness and lysergic texturizing to their doomic onslaught, not enough to take things way out on a limb but just enough to show that  if they wanted to they could take things in a whole other direction. 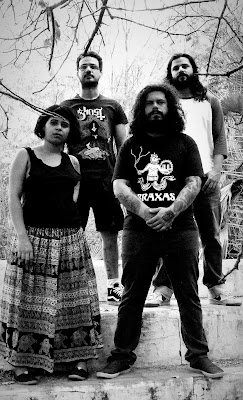 Sound-wise Black Witch have come a long way from the slightly naïve and raw doom they first delivered to us via their debut release "Aware", gone are the untamed vocals, the reliance on just one or two riffs to see a song through and gone is the raw edged production values instead "The Spiral II" presents us with lilting if somewhat monotonic melodies, numerous shifts in time and tempo and a production that, although is smoother, warmer and much more polished than that of the bands first release, still manages to retain all the required grit and grime an album of this musical style demands
Check it out....
© 2021 Frazer Jones
Posted by Desert Psychlist at 13:32