Lucifer's Children are Lidi Ramirez (vocals) Edu Centurion (drums) and R.Doom (guitars/bass), a doomic trio from Asunción, Paraguay whose music tends to lean towards the more "traditional" end of the doom spectrum. The trio's sound is one of huge reverberating riffs played at sedate tempo's over rhythmic backdrops of slow pounding percussion around which a mixture of neo-classical and bluesy lead guitar solo's squeal and scream accompanied by a vocal that is clean and just different enough to give their music a "quirksome" edge. The band have just recently released their second full length album, and first as a trio, "Signs of Saturn" (vinyl to be released via DHU Records in 2022). 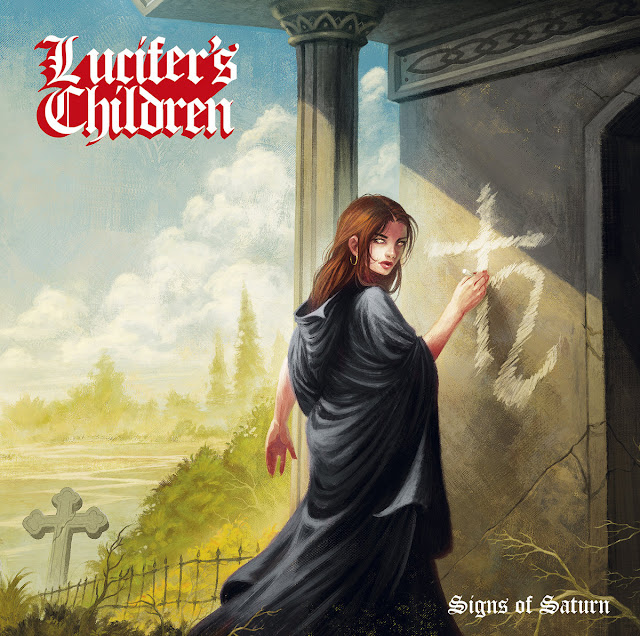 For a band whose sound is probably closer to traditional doom than it is proto-doom it is quite surprising to hear them open with a track that sits firmly in the latter's territory. "The Blessed Harvest" chugs along on a mid-tempo groove driven by punchy drumming and decorated with Iommi inspired riffs and solos with only the merest hints of the bands more traditional roots allowed to peek through. Vocally though Lucifer's Children do not ascribe to either doomic camp, Lidi Ramirez's vocals possess neither the gothic operatics of  traditional doom bands like Candlemass and Solitude Aeturnus and neither do they possess the nasal whine usually associated with Sabbath-esque proto doom, instead we are presented with an almost "witchy" type dynamic, clean and melodic but with just a hint of gritty menace in its execution. "Exiled Angels" follows and finds the band back in their more familiar traditional territory with Ramirez's sinister vocal tones crooning and crowing of a groove packed with all the elements we have come to expect from the genre, neo-classical passages tinted in gothic textures wrapped up in dank guitar motifs that reverberate like rumbling thunder over ponderous and deliberate percussion. For "My bloodlust to the moon" Lucifer's Children slow things down to a virtual crawl with Edu Centurion's drums pounding out a hellish tattoo over which R.Doom crunches out low tuned powerchords that linger long in the air before slowly dissipating and being replaced, Ramirez adding to the songs atmospherics with a suitably baleful vocal. Title track "Signs of Saturn" sees the band step up the tempo and, as they did with the albums opening track, blend their traditional sound with a more proto-doomic dynamic while "Goat of Mendes" finds the band sprinkling their doom with a little occult rock flavouring. Traditional doom is by its own nature a genre known for its dramatics and things do not get anymore dramatic or atmospheric than album finale "The one who hears the time's voice" , a sprawling doomic tome spread over ten minutes that incorporates everything you could possibly wish for from an album that sits within the doom canon, huge dark and boasting one of the albums best vocals it is a fitting end to what is very fine and enjoyable collection of songs. 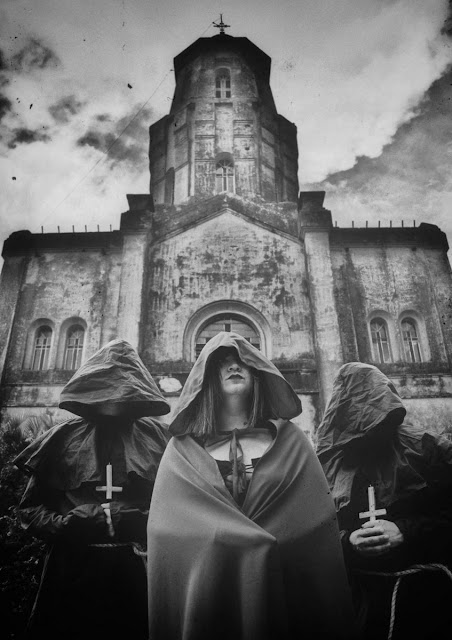 Traditional/Epic doom has become somewhat of rarity these days having slowly lost ground, and much of its audience, to stoner doom, proto-doom, occult rock and even death doom so its good to know that there are bands still out there carrying the torch for the genre's original form. Lucifer's Children's "Signs of Saturn" is by no means as polished or lustrous as say Candlemass' "Epicus Doomicus Metallicus" or Trouble's "Psalm 9" but it does have a rough charm all of its own and also carries an essence of that dark magic that made those albums so iconic.
Check it out ....
© 2021 Frazer Jones
Posted by Desert Psychlist at 17:30