It seems like an age since Desert Storm last released "Sentinels", an album that still gets regularly spun at Stonerking Towers, so it was with gladdened heart that Desert Psychlist received the news that the band were releasing "Omens" a brand new opus crammed to the gills with their trademark mix of bombastic stoner rock , caustic sludge metal and hard heavy rock but also an album packed full of surprises. 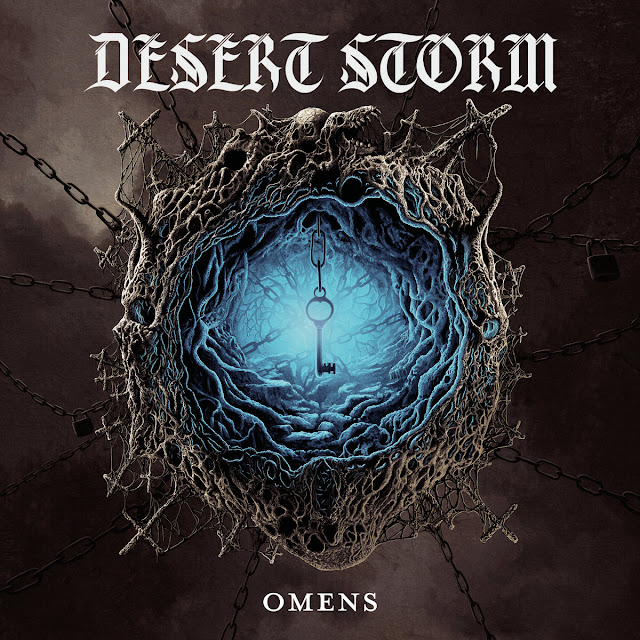 Title track "Omens" opens proceedings, an eerie poem narrated in gravelled, almost gothic, tones over a backing track of droning effects that then slowly fade into silence. "Black Bile" follows and here we are presented with the Desert Storm we have all come to love and cherish with Matthew Ryan roaring and growling over a doomic groove interspersed with moments of proggish complexity, Chris White and Ryan Cole's guitars trading off chiming arpeggios and crunching refrains over an ever shifting rhythmic backdrop courtesy of  Elliott Cole (drums) and Chris Benoist (bass). "Vengeful Gods" and "Pain, Grief and Suffering" follow in much the same vein, both are classic Desert Storm songs full of vitriol and anger, the former a mid tempo workout touched with a degree of doomic dankness, the latter a more strident, sludgy and demonic workout.. "The Path of Most Resistance" blends the bands love of a raucous riff with their new found love of post-rock textures and subtle prog(ish) colourings while "The Machine" hits you square on the jaw with some nasty heavy sludge vocalising over a brutal fractured groove while also utilising a bit of off-kilter weirdness in its mid section to keep you on your toes. "Lockjaw" follows its angular prog metal groove, decorated in a mixture of  clean, gravelled and demonic vocal tones, hits hard, fast and heavy. The album closes its account with "Rebirth" a beautiful, if somewhat unexpected, folk song that has a strong Roy Harper(ish) vibe both musically and vocally.

If you are coming to Desert Storm's new album expecting more of the same sludgy heavy hard rock the band explored on "Sentinels" then you might be in for a rude awakening when you hear "Omens". The band have opted for a more experimental and occasionally off-centre approach to their grooves this time around and its a approach that we at Desert Psychlist think has paid off.