Desert Psychlist spoke in a recent album review of bands whose sound is somewhat a sum of their influences, i.e. if a bands members grew up listening to Iron Maiden and Judas Priest then there is a good chance that some of that music is going to seep into their own grooves. As far as we at Stonerking Towers are concerned their is nothing wrong with this just so long as you are honest and are prepared bring something of yourselves to the party and avoid becoming a pastiche/carbon copy of the bands that influenced you and your sound. California's Early Moods do not try to hide or deny their love of early doom bands like Candlemass, Trouble, Witchfinder General and Black Sabbath but nor do they slavishly go out of their way to sound like their heroes, yes you will hear recognisable traits on their debut EP "Spellbound" that will remind you of where their influences lie but you will also here a band trying to be true to themselves and in our opinion succeeding. 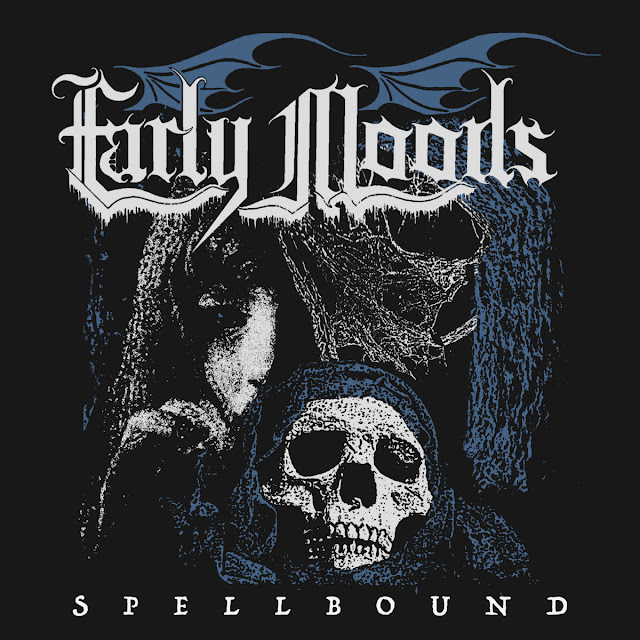 Part of why "Spellbound" works is that it doesn't just draw from an endless well of Sabbath-esque doomic riffage but also dips it's toes into the realms of NWOBHM and the good old fashioned heavy metal of bands like Saxon and Motorhead. The listener will find as many galloping refrains on "Spellbound" as there are dank riffs and doomic crunch and it is this balance of metallic styles that makes "Spellbound" such a fulfilling and enjoyable listen. Title track "Spellbound" is the perfect example of this balancing act, Alberto Alcaraz (bass/vocals/synth) and Chris Flores (drums) masterfully shift the songs dynamic from a doomic plod to a strident gallop and back again without breaking sweat while Oscar Hernandez and Eddie Andrade trade off riffs, licks and solo's that range from dark and doomic to bright and bluesy, Alcaraz's strong clean and powerful vocals soaring above this mayhem with unexpected clarity proving to be the cherry on the cake. Of course one song does not make an EP and the four songs that follow, "Starless", "Isolated (feat. Alan Jones)", "Desire" and "Living Hell", all have their fair share of mouthwatering twists and turns with "Isolated" standing just that little more erect and prouder than its neighbours due to it's slightly off kilter vocal melodies and its mix of subtle and abrupt changes in both time and tempo. 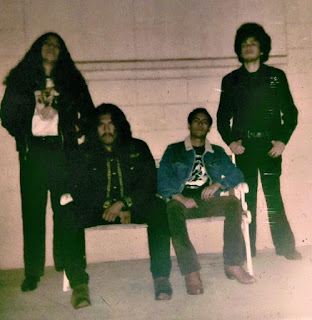 Familiar without being fake, doomic yet not dank and heavy but not leaden "Spellbound" is superb debut that may not be the release that propels Early Moods to the giddy heights of their heroes but it is one that will put their collective foot on the first rung of that ladder.
Check it out ….