In 2015 an album promo arrived in Desert Psychlist's in-box that proceeded to blow our minds to smithereens, the album came from a three piece combo working under the collective name of Rosy Finch, that album was called "Witchboro". "Witchboro" was an intriguing mix of ethereal occult rock and stoner(ish) sludge that impressed us so much at Desert Psychlist that we made it our #1 album of 2015!
Things went a little quiet after "Witchboro" with the bands only release being "The Sunset Acoustic Sessions" a delightful collection of unplugged versions of songs culled from "Witchboro" and the bands debut EP "Wolves Waiting". Things seemed to be on the up for Rosy Finch but life has a habit of shifting the goalposts and during the recording of the bands prospective new studio album things took an unexpected turn when bassist/vocalist Elena Garcia and drummer Lluis Mas announced they were leaving the band to pursue other interests. Guitarist/vocalist Mireia Porto was left in somewhat of a quandary, should she call it a day and leave an almost completed album lying in the vaults or take control of her own destiny and finish the album. Thankfully she opted for the latter, with Mas having completed all his parts it was left to Porto to fill in the bass parts Garcia had not quite completed before her departure and to also take on the bulk of the vocal duties. Given all the history surrounding its recording you could well imagine that an album recorded under so much turmoil might come across a little fractured and unfocused but that would be far from the truth, the new album "Scarlet" ( vinyl - Lay Bare Recordings, cd - Discos Macarras / LaRubia Productions
and cassette - Spinda Records) is quite the game-changer. 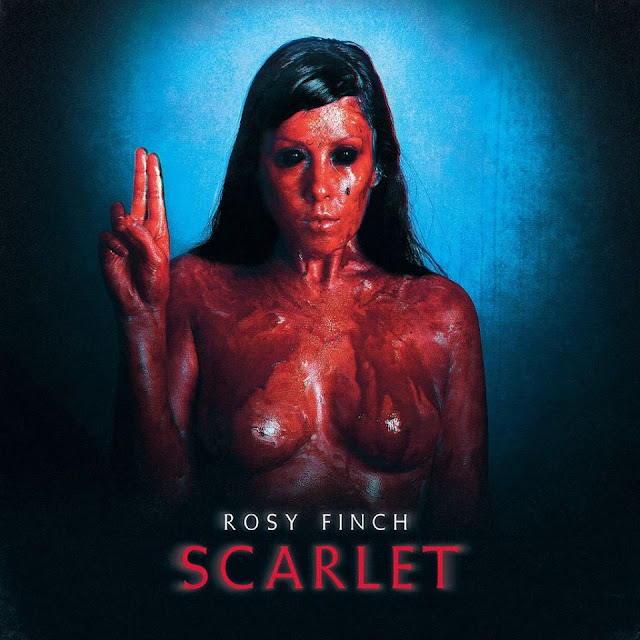 Much like "Witchboro" "Scarlet" is a conceptual piece but ,unlike "Witchboro", "Scarlet" is not based around some fictional village but around the colour red and the feelings and emotions often associated with that colour, many of the songs alluding to the colours different shades with titles like "Vermillion", "Ruby" and "Dark Cherry" . Another thing that will hit the listener is the harder sludgier edge Rosy Finch bring to the table this time around, the band eschewing much of the ethereal qualities they explored on "Witchboro" for a more extreme metallic sonic attack with danker crunchier guitar tones and vocals that range from harmonious and melodic to abrasive and harsh. Do not however be fooled into thinking that Rosy Finch have abandoned the sunshine and plunged headlong into the darkest pits of hell with their latest opus as there are still instances of the bands more ethereal leanings to be found scattered around the nine tracks that make up "Scarlet"(ten if you include the hidden track "Lady Bug"), it just that they are a little more hidden and balanced out. This "balancing out" is no better exemplified than on the excellent "Gin Fizz" a song that finds Rosy Finch utilising undulating dynamics, the song swaying from soothing and serene to violent and jarring with Porto switching her vocals, from a whisper to a roar, accordingly. The band use this trick to great effect throughout "Scarlet", shifting up and down through the gears so as to maintain continued interest and so ensure a much more rewarding listening experience for their prospective audience.

Mireia Porto promised, in press releases, that the new sound of the band would be "very visceral and heavy" and Desert Psychlist can confirm that, with "Scarlet", Rosy Finch more than delivers on that promise. "Scarlet" is a stunning album that should appeal to not only to those old fans, who loved the bands blend of  occult(ish) sludge and ethereal doomic majesty, but also to those who previously might of thought "Witcboro" was a little lightweight and fey for their tastes and were looking for something with a little more bite.
Check it out ….


#For those that might be thinking that Rosy Finch's story has come to and end and that "Scarlet" was the last throw of the dice for this unique and intriguing band will be pleased to learn that, despite the departure of  Garcia and Mas, Mireia Porto is determined that Rosy Finch will live on. Porto has recruited to the cause the services of Juanjo Ufarte on drums (The Dry Mouths/ Baläte/ Grajo) and Óscar Soler on bass ( Pyramidal/ Domo) for both upcoming gigs and future recordings. 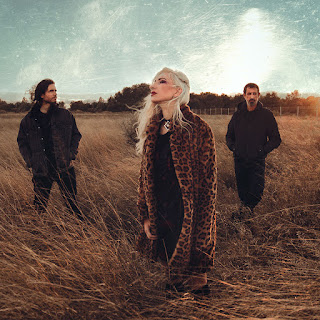