From a country that keeps giving comes a band who are equally giving. Brazil's Gods & Punks have, over a three year period, been turning out quality release after quality release, the Rio de Janeiro quintet steadily gaining a legion of fans both in their own country as well further abroad. Although things have been going well on the international scene things at home have not been going so well, the band recently lost access to a place they called "The Attic", a rehearsal space where they thrashed out ideas and composed the majority of their musical tomes. Fortunately, and  after a period of fruitless searching, the band chanced upon a place called "The Shack" an ideal new home set in a semi-jungle environment where, in their words, "the magic happened". That "magic" can now be witnessed firsthand on the bands third full length album "And The Celestial Ascension" 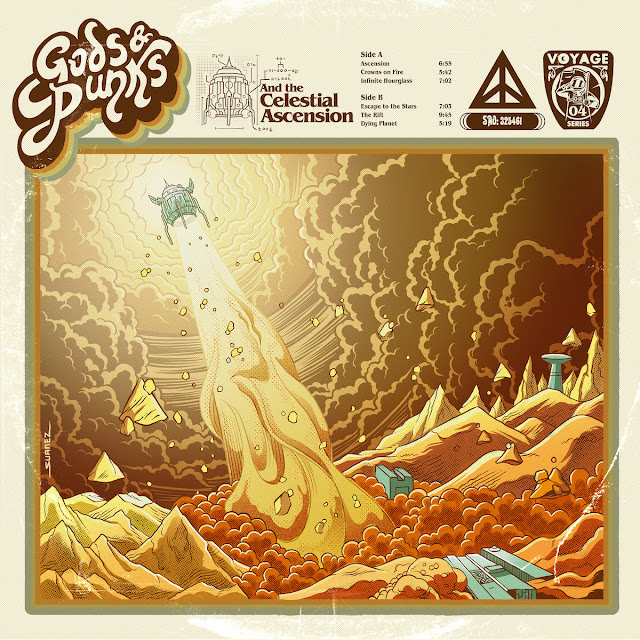 Gods & Punks seem to be a band on a consistent mission to blow minds, the band, who took their name from a Monster Magnet song, have progressed at alarming rate since the release of their debut EP, gradually shifting from being a four to the floor heavy stoner unit to one unafraid to experiment and take chances. The bands sound has, in just a three year period, evolved to such an extent that it's hard to believe that the band who gave us "The Sounds of the Earth" is the same band currently promoting their new album "And the Celestial Ascension", where were once crunching riffs and punchy rhythms we now find intricate sweeping arpeggios and shimmering percussion. This is not to say that when called upon Gods & Punks can no longer pin you to the wall with the power of their refrains, they can and do, just that there is a more cerebral, intelligent feel to their grooves now that somehow makes them feel much more powerful and a whole lot more interesting. Undulating is a strange word to attribute to music from what is essentially a hard rock band but that is exactly what you get with songs like "Ascension", "Infinite Hourglass" and "Dying Planet", songs with grooves that have the ability to pick you up and carry you along with them, grooves that ebb and flow like waves on an ocean's surface, powerful and dangerous one minute calm, serene and gentle the next.

Complex, clever and packed solid with superb vocal performances and outstanding musicianship "And the Celestial Ascension" is Gods & Punks finest release to date, how the band will top this is anyone's guess but you can bet your bottom dollar they will try and given their current trajectory will most probably succeed.
Check 'em out ….