Clouds Taste Satanic will be no strangers to Desert Psychlist's readership, we have covered three of their releases and we were not about to let the bands new two song EP "Second Sight" slip through our fingers without waxing lyrical on its many merits. For those of you who may have been living in some sort of vortex and are unfamiliar with CTS they are an instrumental band hailing from Brooklyn, New York who have made a name for themselves as a go to heavy doomic band despite the lack of a vocalist. 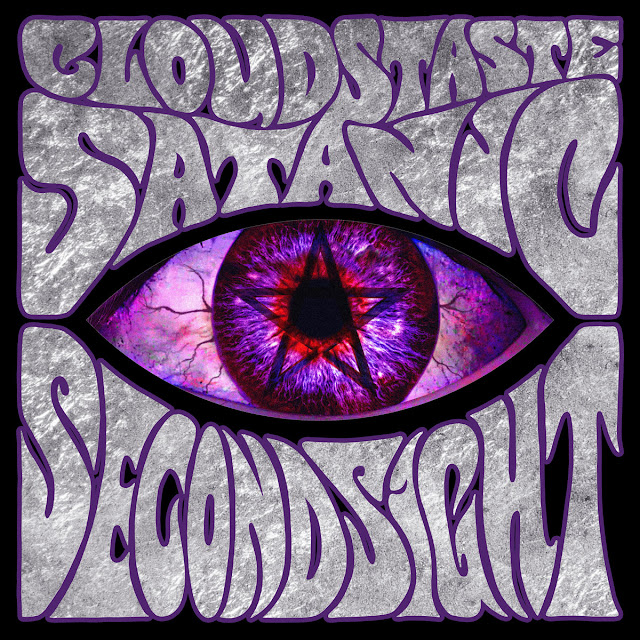 There seems to have been a slight shift in direction from CTS on their new EP "Second Sight", and it is slight we are not talking seismic here, the band are still laying  down the doom thick and nasty but the psychedelic/lysergic elements that have always been an aspect of their sound seems here to have been ramped up a notch or three. Title track "Second Sight" is a prime example of this, the songs constantly changing dynamics spiral to unbelievable heights one minute then plummet into doomy depths the next, the band shifting seamlessly from one groove into another never allowing the music to go down blind alleys it can't return from and constantly finding new destinations they can take it to. Second song "Black Mass" finds CTS adding a touch of old school hard rock and heavy metal in with their staples of heavy psych and post-doom, the rhythm section of Sean Bay (bass) and Greg Acampora (drums) at one point laying down an almost Iron Maiden type gallop behind the crunching riffs and swooping solos of guitarists Steven Scavuzzo and Brian Bauhs. CTS are also unafraid to  employ ambience and atmosphere as weapons in their musical arsenal as they do at the songs three quarter mark where a dark throbbing bass line, accompanied by droning effects and controlled guitar feedback, leads into menacing slow, low riffage pushed by powerful deliberate percussion before then taking off on a lysergic flight of guitar screaming fancy to take things to the close.

There are a myriad of bands out there travelling the instrumental highway but none come close to replicating what Clouds Taste Satanic bring to the table with their particular brand of instrumental post-doom and lysergic metal. We at Desert Psychlist thought it would be damn hard for the band to better their previous EP "Evil Eye", such was its sonic impact and high levels of writing and musicianship, but CTS have proved us wrong and with "Second Sight" the band have raised the bar to whole new level
Check it out …….