When asked about their influences desert/stoner rock pioneers Kyuss once replied that they were more inspired by Black Flag than they were Black Sabbath, this is not surprising as stoner rock, in its early stages, had a lot more in common with punk rock than probably any other genre, both stoner/desert rock and punk were born from a dissatisfaction with the musical climates surrounding them and both rock sub-genres started their lives at a grass root level.

Texas quartet Mortales, Lucas Indrikovs (lead vocals/rhythm guitar); Michael Munoz (lead guitar/vocals); Luis Roa (bass); Brett Hanrahan (drums), don't call themselves a punk band neither do they say they are a stoner rock band but you would have to be severely hearing impaired to not pick up on the elements of both within their grooves. The band skirt around the issue of genre classification by describing their mix of punk, stoner metal and hard rock as "gnarcore", and the spirit behind their grooves as something they like to call "The Gnar". If you want to find out what "gnarcore" sounds like and to see if "The Gnar" grows strong in you too then we suggest you give the bands second album "Death Rattle Valley" a spin. 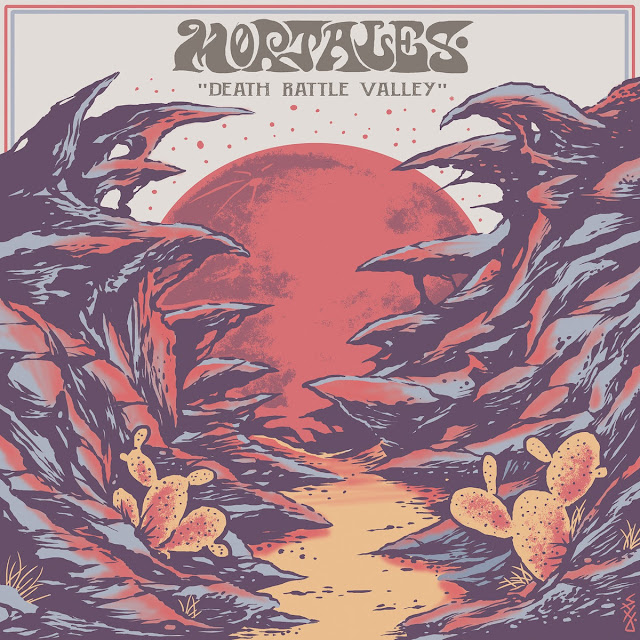 "Warhead" kicks off "Death Rattle Valley" and totally justifies Desert Psychlist's intro to this review by hurtling out of the speakers in an explosion of punkish venom, raucous chugging powerchords and in your face rhythms coated in gritty, almost shouted, vocal tones, the fact that it has a middle section that jams a more stoner(ish) psych vibe adding even more credence to our original observations. The band initially bring things down a notch or two for next track "Hostility of a Bomb" by relying on a slow. low heavily fuzzed groove to build up an air of a brooding atmosphere, restraint however is not one of Mortales greatest assets and its not long before things take a more raucous turn and the band take off on a throbbing fuzz drenched hard rock groove decorated in a mix of gravel throated lead and harmonised vocals  the song switching back and forth between these two dynamics before finally checking out on a wave of fizzing, popping electronic noise. "Psilocyborg" finds Mortales donning  their psychedelic robes and matching them with dark doomic headwear while "Bring All Your Fire" has them decking themselves out in attire more appropriate for a party in the desert. "Bricks" follows and here the vocals take on a smoother less abrasive tone that perfectly matches the songs heady blend of doomic stoner metal and galloping hard rock. Next up is "Golem" a song that can't quite make its mind up if its a punk, stoner or surf rock and ends up a little bit of all of them. Finally we arrive at the last track of the album and, for Desert Psychlist, the best of the bunch, "Nazareth" is a bluesy, doomic and atmospheric tome with an epic feel, if you have had trouble finding that element the band like to call "The Gnar" on this albums previous songs you should have no problem finding it here, as Star Wars Jedi Yoda might say "Strong is The Gnar in this" 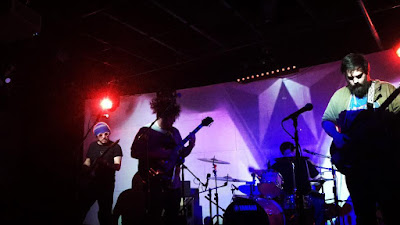 "Death Rattle Valley" is an uncompromising, unclassifiable and  unbelievably good album from a band who are unafraid to forge their own musical path regardless of where that path may take them. Mortales might call what they do "gnarcore" you might want to call it something else, Desert Psychlist calls it essential listening.
Check it out …..