It seems only five minutes since Desert Psychlist reviewed Elder Druid's live EP "Attic Sessions" and already we are back at the keyboard with the bands unique sounding grooves playing in our earphones, this time though we are dealing with a whole new animal, this time we are dealing with a full blown studio release going by the name of "Magicka". 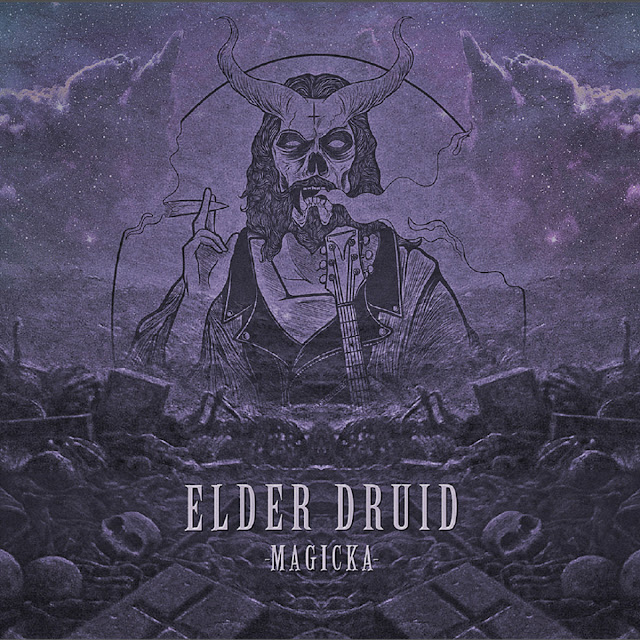 "Magicka" consists of five songs, three of which have appeared as live cuts on the bands two "Sessions" EP's. "Ides Of March", "Warlock" and Reigning Hell" differ from their live counterparts only slightly but reap the benefits of a studio treatment by appearing larger, crisper and fuller sounding all without compromising the gnarly grittiness of the original live recordings .Of the three it is "Reigning Hell" that takes most from Andy Shields (Hornets) excellent production, its doom drenched groove ramped up to eleven with an earthier, lower, bassier attack that sits perfectly with it's "selling my soul to Satan" lyrical content.
The two newer songs are "Rogue Mystic" and "Scarab" , the first  an atmospheric brooding affair that tells a tale of an outcast shaman, a "Draconian Master of the Arcane" against a backdrop of slow fuzz dripping riffage and pounding rhythm that boasts a superb Greg McDowell vocal, his throaty guttural delivery coming across raw but perfectly comprehendible    . The second sees McDowell singing a peon to a not so humble Egyptian beetle performed to a gritty desert soundtrack garnished with eastern and Arabic guitar flourishes from Jake Wallace and fuzz soaked riffage from Mikey Scott all driven from beneath by the tumultuous rhythmic force of Dale Hughes's bass and Brien Gillen's drums.
"Magicka" is a superb EP both for new listeners and those already familiar with Elder Druid's excellent mix of riff heavy sludge and doom. The bands selection of Andy Shields as producer/mixer/engineer has paid off in spades, the Hornets man has reinvigorated the bands sound, sanding off some of their rougher edges and polishing them until they gleam but doing so without losing any of the bands feral intensity and attack, a match made in Heaven (or should that be Hell)
Check it out ....

Posted by Desert Psychlist at 05:18