WOE, Felix Russell (guitars/vocals); Mat Frodsham (drums) and Brady Patmore (bass), hail from Tasmania, Australia and may be recognisable to some due to their involvement in the bands Taurus, Tarot and The Wizar'd. The trio take some of their inspiration from Ozzy era Sabbath but not exclusively, nestled among those Iommi-like riffs you will also find elements of NWOBHM and 70's hard rock as well as smatterings of stoner-like fuzz all of which combines to give them a more traditional doom sound that is more akin to St. Vitus, Pentagram, Witchfinder General and Trouble than it is Birmingham's iconic foursome, as you will no doubt discover when taking their debut album "Czernobog" (Crypt of the Wizard) for a spin. 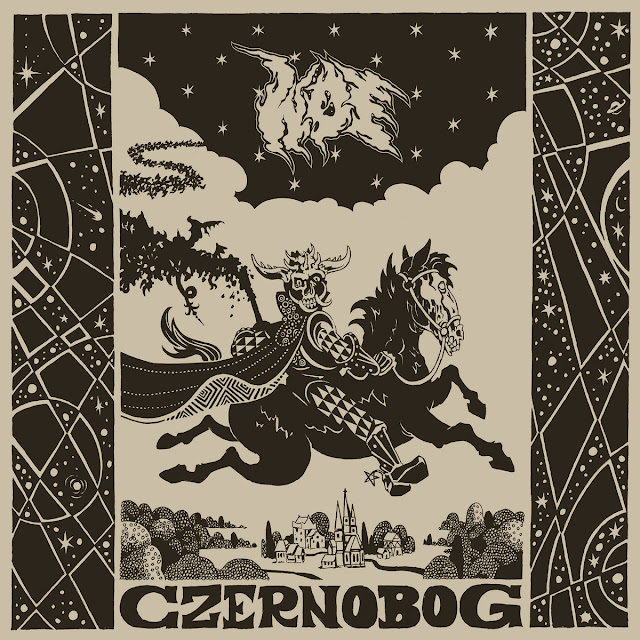 Russell introduces first track "Waste of Life" with a deliciously dank guitar motif that is then joined by Frodsham and Patmore in a groove that is, in its initial stages, of a traditional flavour but then moves up a gear and takes on a more proto-doomic dynamic. Russell also handles the vocals, his voice clear clean and strong may not have the same doom-ic gravitas of Sabbath's Ozzy Osbourne or the versatility of Trouble's Eric Wagner but what he lacks in those departments he makes up for in clarity, his vocals pristine and discernible reminding Desert Psychlist, at times, of Diamond Head's original vocalist Sean Harris only with slightly more range. "A New Day" follows and finds the trio adding a little more melody into the equation, retaining the musical drive and bite they showed us on their opening track but putting a little more "swing" into the vocals. "The Ghoulish Gathering" finds Frodsham and Patmore laying down a galloping NWOBHM groove for Russell to decorate with an array of dark riffs and soaring solos while singing of "communal poisoning" and "grotesque reflections" in strong distinctive tones while title track "Czernobog" opens with gently strummed chords and shimmering arpeggios but then explodes into what could be considered the albums most doom-ic opus, Frodsham's thunderous drums and Patmore's deep growling bass laying down a stuttering, spluttering groove over which Russell delivers crunching refrains and scorching lead work, the guitarist also tailoring his vocals with a little distortion to match the intensity of the music surrounding them. "Rays of Apollo" closes proceedings and is a doom-ic barnstormer that nods its head to those that picked up the doom baton from Sabbath and ran with it, the spirit of bands like  The Obsessed, St. Vitus, Pentagram and Trouble all can be found lurking here as well as a smattering of doom-ic elements, both vocally and musically, cherry picked from today's current doom scene. 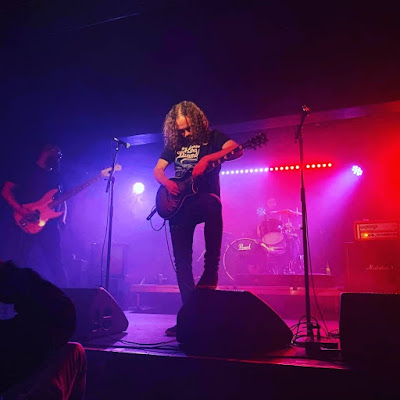 Black Sabbath are rightly regarded as the godfathers of all things doom but let us not forget the others that served, Sabbath may have ignited the torch, but there were also quite a few other bands who, when Sabbath floundered under the weight of  line-up changes, drug abuse and management issues, strived to pick up that torch and keep doom's flame burning, it is these bands that WOE with their debut "Czernobog" pay tribute to.
Check 'em out .....
© 2022 Frazer Jones
Posted by Desert Psychlist at 02:20