There could be many reasons why a band might change their name, legal reasons, changes in musical direction or the simple fact that there are other bands out there sporting the same or a similar name. Desert Psychlist doesn't know the facts behind why Pennsylvania's formally named Witch Hazel changed their collective title to SpellBook, it could well be a combination of all three, but we suspect it might be that they just got a little peeved off with getting mistaken for Lancashire, UK combo Wytch Hazel, who, it has to be said, tread a similar "retro" path.
Whatever the reasons may be the fact is Witch Hazel are now SpellBook and the band's latest album "Deadly Charms" (Cruz del Sur Music), their second release under their new name, (the first being "Magic & Mischief") is as good if not better than anything they have done under their previous name. 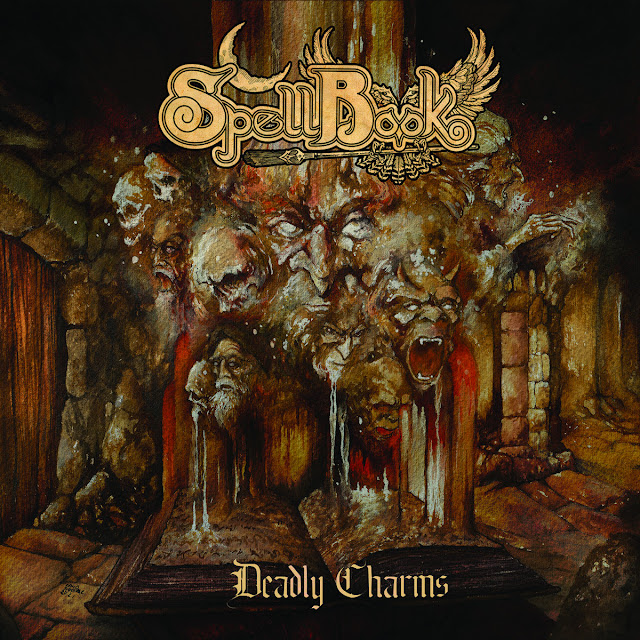 A brief but charming synth/piano piece entitled "1928" opens proceedings, slowly swelling in volume and intensity before just as quickly fading away to be replaced by the thundering rhythms and ear catching guitar motifs of next track "Rehmeyer's Hollow". Now given that we have already mentioned that SpellBook's music tends to lean towards the retro(ish) end of the rock spectrum it is not surprising then to hear echoes of other bands in this song, its chugging proto-doomic groove and Celtic flavoured guitar motif's scream familiarity, add to this a vocal that sits somewhere between Sabbath's Ozzy Osbourne and Pagan Altar's Terry Jones and it's hard not to be taken back to bygone times. "Goddess" follows and reminds Desert Psychlist of one of those songs that back in the day would somehow buck all trends and find its way onto mainstream TV or radio, much like Black Sabbath did with "Paranoid", Iron Maiden did with "Running Free" and Saxon did with "Wheels of Steel", such is the addictiveness of its vocal melodies and the strength of its galloping groove. Up next is "Pandamonium" a song that finds SpellBook blending Sabbath-esque proto-doom with a little 80's NWOBHM and throwing in some old school 70's heavy rock into the cauldron just for the sheer hell of it. For "Her Spectral Armies" the band take a leaf out of Metallica's book by beginning and ending the song with a wordless female vocal, much in the same vein as the one Marianne Faithful famously supplied for "The Memory Remains", while in-between jamming a groove that undulates between torch-like balladry and strident metallic bluster. There is a touch of Ghost about next track "The Witch of Ridley Creek", in that it has a similar melodic swing to something that Papa Emeritus and his cohorts might attempt only with this song possessing a grittier and less theatrical dynamic. Title track "Deadly Charms" jams a mid-tempo groove decorated in scorching lead work and crunching guitar riffs anchored down by throbbing bass and solid punchy drumming over which the vocals soar and swoop with sneery nasal gravitas. "Night of the Doppelganger" begins off-kilter and doomic but then explodes into something not too far removed from being power metal, the band hitting into a strident groove only momentarily broken by the band going off-piste into unexpected and frankly quite weird waters before reverting back to their initial stridency to take the song to its close. "Out For Blood" closes the album and finds SpellBook waving goodbye with a song that is in total contrast to the occult rock swagger and proto doom-ic bluster that the band have assailed us with thus far, its jangly guitar textures and Beach Boy style vocal harmonies proving beyond a shadow of a doubt that if these guys ever wanted to take a more mainstream direction, they are more than capable of making that transition. 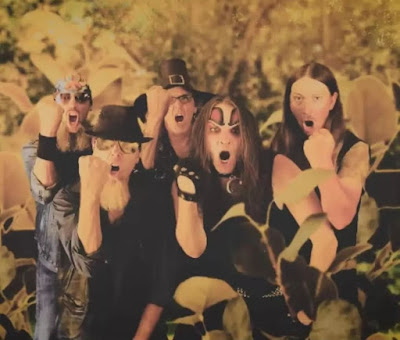 We have described SpellBook as being "retro" but this band are not just about recreating the past, there is much to be found within the nine songs that make up "Deadly Charms" that is fresh, contemporary and relevant to today's underground rock, metal and doom scene. Whether you like to get your rocks off listening to the grainy proto doom of early Black Sabbath or its Ghost's current stadium filling melodic occult rock that floats your boat SpellBook's "Deadly Charms" has something for you.
Check it out ....
# SpellBook's "Deadly Charms" will be released on Cruz del Sur Music 30th September 2022
© 2022 Frazer Jones
Posted by Desert Psychlist at 07:39