Maragda, Marçal  (bass/vocals/synth); Guillem (guitar/vocals/synth) and Xavi (drums/vocals), are a trio from Barcalona, Spain who augment their sonic attack by use synths to add colour and texture to their  blend of heavy psych and complex prog, not to overpower their grooves but as a tool to expand those grooves and give them added depth and structure, to give their sound a fullness not usually associated with underground music. Don't get us wrong if you took the synths out of the equation Maragda would still be a band with the power to blow your mind to smithereens, and their self-titled album "Maragda" (Spinda Records, Necio Records & Nafra Records) would still be an album of the year contender but with those synths .....WOW! 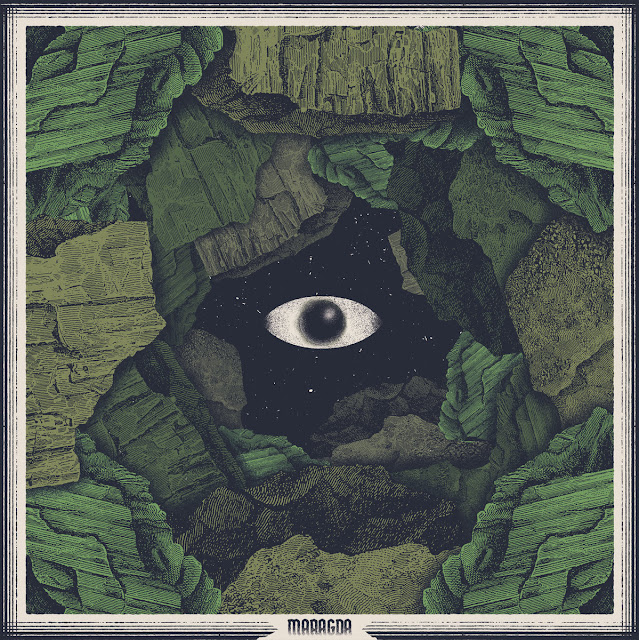 "Maragda" is a concept album and that being the case it would be remiss of us if we didn't include the bands statement regarding the ideas behind the music, so here goes "This record tells the story of Maragda, a civilization that took refuge underground after the Great Disaster. Many years have passed now, and the memory of a life on the surface has completely faded. People live under the oppression of a totalitarian government, The Core, when suddenly a strange voice speaks inside their minds. After this call, a group of rebels launches an expedition through The Unknown, willing to discover the secrets of Maragda”. Whether this concept works in tying the seven songs that make up "Maragda" together is hard to say, the first two songs of the album, "The Core as the Whole" and "The Calling"  are clearly explained in the bands statement but after that, and without the benefit of having a full storyline to hand, things get a bit confusing as to how each of the following songs fit in with the story, so for the purposes of this review we will concentrate on each song as a separate entity and for its impact as a standalone piece.
"The Core as the Whole" comes out of the traps on a wave screaming feedback then explodes into a riff laden groove that although is hard hitting and heavy nonetheless has an air of proggish complexity about it, this prog-like vibe is expanded upon when the song moves into its next phase and those riffs suddenly make way for ringing arpeggios and intricate chord progressions that glisten and sparkle around the low-key and beautifully melodic harmonies that accompany them. There are elements to be found here, and for that matter throughout this album, that will remind older listeners of both Rush and Yes, especially in the way Maragda go about constructing their songs, but there are also elements that will be familiar to those who regularly listen to the likes of Elder, All Them Witches and Howling Giant. "The Calling" follows and here we find Maragda channelling a little indie jangliness into their heavy prog and psych with the guitarist even throwing a little country rock flavoured shredding into the mix to make things even more  interesting while "The Hermit" finds the band getting a little angular and off kilter with circular guitar motifs vying for space with strident bass lines and insistent rhythms around which coolly executed harmonies ask us if  "reality goes any further". A low and gritty bass refrain introduces next track "Orb of Delusion" supported by restrained but effective percussion over which slightly echoed vocal harmonies waft their mellow magic, the song also boasts one of the albums best guitar solos, a scorching blend of structured dissonance and cosmic bluesiness. "Crystal Passage" follows and those synths we spoke of in our introduction piece are pushed to the fore to create a moody atmospheric instrumental that has a floating orchestral feel. Those synths are utilised a little differently for next track "Beyond The Ruins" cleverly giving the songs already strident and full on instrumental attack and upbeat vocal meters an added element of va-va-voom. For their final song, "The Blue Ceiling"" go all in on an enthralling and totally mesmerising instrumental that gives the guitarist free rein to explore everything from country style picking to Steve Howe-like prog shredding in his blistering solos. 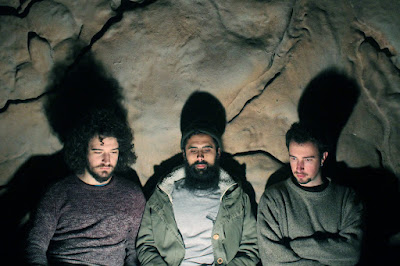 "Maragda" is one of those albums that you could play a thousand times and on the thousandth time still find something new to send your mind into a spin. There is so much going on within these seven essential slices of metallic tinted prog and heavy psych that one sitting will never be enough to take it all in and that, my friends, is the hallmark of a truly great album.
© 2021 Frazer Jones
Posted by Desert Psychlist at 01:46