Houston, Texas' Direlands may have come up with a unique marketing ploy regarding their artwork, the band released their first EP "The Cave You Fear" in October last year (2020) and this year they have released their second "Ascension", both releases sport exactly the same artwork with the only difference being "Ascension" has an extra splash of colour added to its skyline. Desert Psychlist may be wrong but we suspect that the bands next release will sport the same artwork again and another colour will be added and that this will continue EP by EP until we are presented with a full completed piece. If this is the bands intention then its a great idea but in order to achieve this goal and get listeners to buy into their concept the band need the grooves that will back up that concept, thankfully Direlands have those grooves. 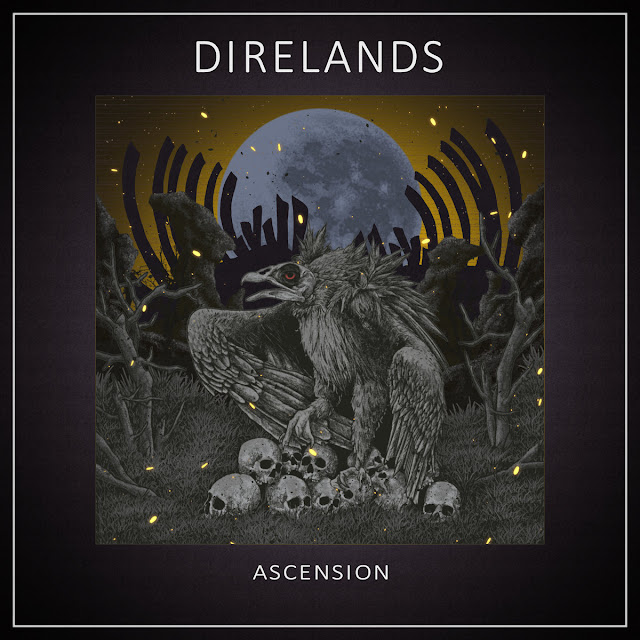 Direlands call themselves an "American heavy metal band" who draw their inspiration from "classic metal, the occult, conspiracies, and a prevailing dystopic worldview". Now while there is no doubting Direlands "classic metal" credentials,  Maiden -esque galloping bass lines, crunching riffs, finger blurring guitar solos and insistent driving rhythms can all be found in abundance here,  there are also aspects of Direlands sound that owes much to more modern doom and stoner metal. This is no more evident than on opening number "Singularity", the songs gnarly riffs and thunderous rhythms are delivered at a few BPM's beneath thrash tempo with plenty of interesting twist and turns along the way while vocalist Jarett Dureell shreds his vocal chords to ribbons with a demonesque delivery that reminded Desert Psychlist somewhat of a slightly hoarser Emil Johansson (Ordos). Following track,"Doombringer", is probably more doomic than it is actual doom and what we mean by that statement is that although there are elements of doom to be found here, especially in some of guitarist Troy Binegar and bassist Patrick Gerek's choices of riffs, the overall vibe is still one of old school metal and in particular that NWOBHM groove beloved of Iron Maiden, Judas Priest and bands of that ilk. All the best metal bands have one of those slow burning torch songs that will induce mass swaying and the holding up of lighters and Direlands is "Blood Moon" an atmospheric number, underpinned by some intricate percussion work from Daniel Thompson, that builds and builds layer by layer before signing out not on the screaming finale you might have expected but on an equally satisfying dark stuttering riff. "Beyond The Horizon" closes  proceedings and is a song that opens up the playground for "old school" metal to mix together with its "new school" cousins doom and stoner metal, Gerek and Thompson lay down a superbly shifting rhythmic platform for Binegar to garnish with soaring technical solos and Iommi-esque riffs over which Dureell flexes his rock god muscles almost coming over like a demonically possessed Bruce Dickenson in places, not so much harnessing the same air raid siren power of the Maiden frontman but certainly matching him in the meter of his delivery. 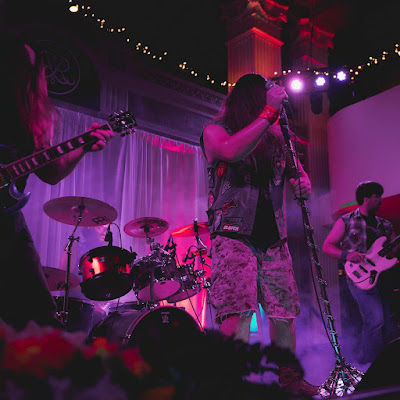 Direlands have with "Ascension" taken the vibe of the traditional metal many of us grew up listening to and blended it with elements of the harsher edged metal that popular today, melding these two metallic styles together to create a groove that should appeal to fans of both styles without having to compromise their sound or their dynamic
Check 'em out .....

Posted by Desert Psychlist at 13:32