TMPL ~ INITIATION OF THE FOOL .... review

It might seem that the term "occult rock" is a fairly new one but the term has been around since the late 60's. These days the term is often coined to describe music of a doomic nature that, although has many of  the musical attributes associated with "doom", leans more towards the mystical and the magical rather than the satanic and the terrifying. Mention "occult rock" back in the sixties and the bands that came to mind were the UK's Black Widow and USA's Coven and of those two band it is probably Coven that much of what we today tag as "occult rock" can be traced back to. Coven were not a particularly heavy band but it was their satanic themed lyricism over grooves of blues flecked psychedelic rock that laid the path that bands like Blood Ceremony, The Devil's Blood and the subject of this review TMPL would later follow.

TMPL hail from Tucson, Arizona and consist of Abigail Codru (vocals); A. Kruger (guitar);Tyler Major (bass/FX) and Zachary White (drums/organ), the band jam a blend of doomic psychedelic rock, hard rock and metal that is deliciously heavy without being leaden and is taken to an altogether other level by distinctive and  powerful vocals that sit somewhere between ethereal and symphonic, all of which can be heard on their debut EP "Initiation of the Fool". 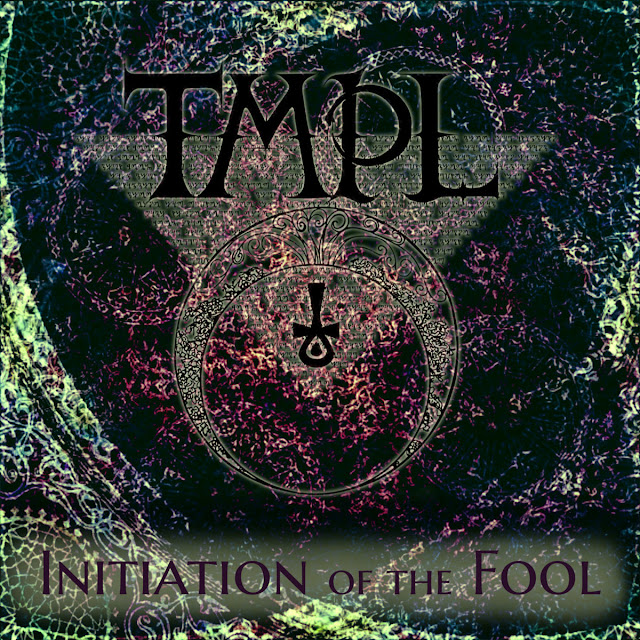 TMPL's "Initiation of the Fool" delivers only three songs but these are songs that once heard are not likely to be forgotten, this is in part due to the strength of the songwriting, arrangements and the instrumental prowess of the musicians involved but is mainly due to the astonishing tones and range of the bands vocalist Abigail Codru. Codru's voice is an instrument in its own right, her vocals waft over rather than tear through the dark, but strangely beautiful, grooves that Kruger, Major and White expertly weave around her and add an extra level of mysticism and pagan-like spiritualism to lyrics which are steeped in both. Much like the aforementioned Coven  TMPL do not find the need to batter and bruise their listeners with relentless down tuned riffage and thundering slow percussion to emphasize their doomic credentials but instead rely on more subtle means to flex their musical muscles. Having said that first track, "Secret of the Shadows"., does owe a huge debt to Kruger's revolving guitar riff combining with Major's bass and White's drums to nail down the songs groove but then this is the EP's opener so we can  excuse them for going for an immediate attention grabbing rocker to pull listeners in. Following track, "Gnostic State of the Holy Death", is the song that really shows what TMPL are capable of, its dark ringing arpeggios, low liquid bass lines and restrained percussion create the perfect platform for Codru's distinctive vocals to sweep soar and float over, her gossamer tones telling us of "horns of black" and "fires of gold" piercing through the dark atmospheric grooves they are surrounded by like shards of sunlight through black clouds. "Witch Moon" closes the EP and finds TMPL blending the rockier aspects of the EP's first track with the more ambient moods of it's second to create something hauntingly beautiful and totally mesmeric. 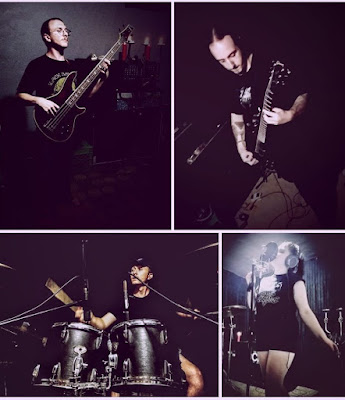 Dark, mystical and with just the right levels of folkish lilt TMPL have shown us with "Initiation of the Fool" just a glimpse of their true potential, let's hope that potential manifests itself in a full album very, very soon!
Check 'em out ......
© 2020 Frazer Jones
Posted by Desert Psychlist at 12:32