Bands performing old school doom, like that performed by Candlemass, Solitude Aeturnus and bands of that ilk, are becoming rarer than hens teeth these days. Ok you could argue that there are a million and one Sabbath-like bands out there all vying for our attention but that argument could be countered by saying that those bands are following a more "proto" doomic blueprint.
Russian Federation trio Grave Disgrace's latest  release "Rest In Peace", although having elements that could be described as "proto(ic)", has a more "traditional" doom feel, the band utilising huge dark reverberating refrains and powerful thunderous rhythms, combined with strong vocals tinted with a pleasing gothic melancholy, to create a dank atmospheric sound that conjures up visions of dark imposing spires peaking over a cold mist laden graveyard, in other words "doom" in its most authentic and "traditional" form. 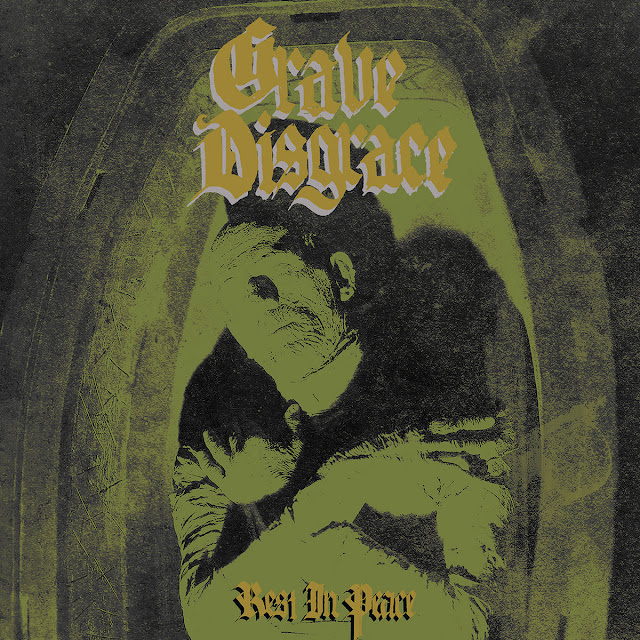 Things begin suitably doomic with the excellent "End Of This World" Konstantin Belousova's pounding drums introducing a song that brings in to play all the elements that you could possibly hope to hear in a song pitched at the "traditional" end of the doom spectrum. Slow, but not pedestrian, guitar refrains pulse and swell over tight and steady percussion while bassist/vocalist, Aleksei Uvarov, tells us of "scary dreams" and "eternal searches" in a voice steeped in weary resignation. As the song progresses into it's final quarter the band begins to show a glimpse of those "proto" elements mentioned earlier with guitarist Sergei Saprantsev's face melting bluesy solo the marker by which the band raise both the songs temperature and tempo. Next song "Time After Time", a dark foreboding tale of man's relentless march to destruction set against a thrumming backdrop of grainy fuzz drenched groove, may share a title with Cyndi Lauper's hit pop ditty but that's about all the two songs have in common. "Dancing On My Grave" follows and here we find Grave Disgrace brandishing their "trad" doom credentials for all to see, plodding and monstrous the song crawls and creeps along at an almost funereal pace in its early stages but then slowly picks up pace until exploding into a Sabbath-esque romp as it reaches its nadir. "Day of the Dead" finds Uvarov effecting a slightly Ozzy-ish nasal tone over a groove that is relentless thanks in part to Belousova's thunderous on point drumming, the drummer locking in tight with Uvarov's growling bass to create the perfect springboard for Saprantsev to launch his screaming guitar solo's from. Title track "Rest In Peace" is probably the most Sabbath-esque song of the album thanks mainly to its slowed down Iommi-like riffs and solos and its shifting time signatures. "Hellbound Express", a short fuzz drenched blues played solely on guitar, closes the album, it is brief, a bit of a strange choice for a finale but one that strangely works. 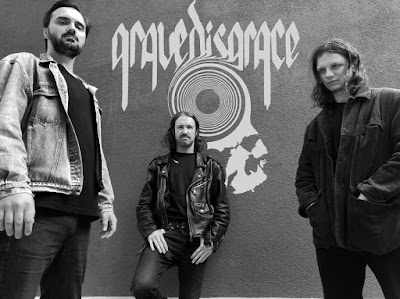 Traditional, proto, true, epic whatever you care to call it "Rest In Peace" is an album that celebrates doom at its most authentic and real, an album that although nods its head to all the sub-divisions of doom still retains its own identity.
Check it out …..
© 2020 Frazer Jones
Posted by Desert Psychlist at 04:09