It starts at the base of the spine and runs like an electric shock up through the vertebrae finally arriving in that sweet spot in the brain where there it explodes like a bomb sending your senses reeling and filling your whole being with an unexplainable delight. We are of course talking about that reaction we feel when we hear music that is so damn good it actually has a physical effect on the body, a reaction Desert Psychlist felt earlier today when we dropped the needle for the first time on UK doomsters Gevaudan's debut "Iter" 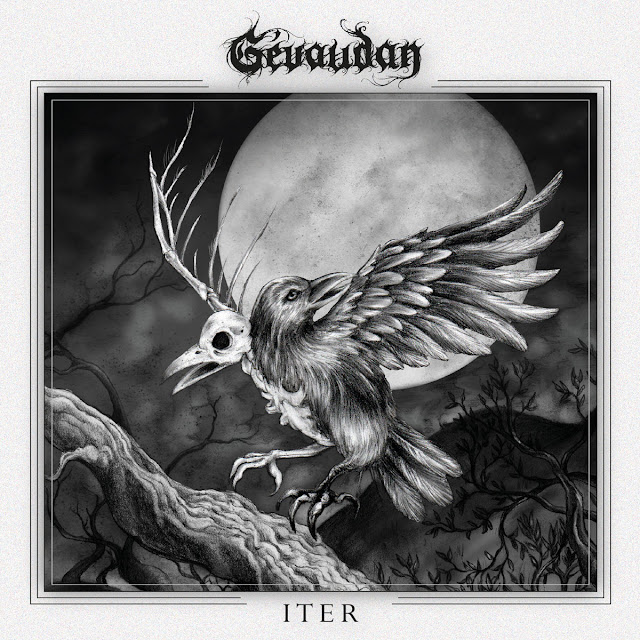 Grief, misery and woe are staple and oft overused themes of many bands working in the field of doom however Adam Pirmohamed (vocals), Bruce Hamilton (guitar), Andy Salt (bass) and David Himbury (drums), under the flag of Gevaudan, manage to give those themes a whole new lease of life with their debut album "Iter". "Iter" is in essence what you would call a "traditional" doom album but to just call it that would be a disservice as there is so much more going on here. Yes there are those themes of despair and sorrow we spoke of earlier and yes Pirmohamed's vocals do have those classic gothic tinted tones that border on rock operatic but when you put these together with the dark, dank and frankly quite prog-like doom that Hamilton, Salt and Himbury lay beneath those vocals and lyrics then you end up with something very, very special. Desert Psychlist's first thoughts, while listening to Gevaudan's debut opus, was to try and compare it with albums from those greats of the traditional doom genre Candlemass and Solitude Aeturnus but the more we listened the more we started to hear something else and the truth dawned on us that what we were hearing had more in common with early Opeth and Ireland's Primordial than it did with Leif Edlings Swedish combo as there are elements of both Opeth's proggish leanings and Primordial's blackened metal intensity in what Gevaudan bring to the table, albeit a little more doomic and vocally a little more traditional. Desert Psychlist could go into one of our usual song by song breakdown's, examining every little vocal inflection and instrumental passage of the five songs that make up "Iter", however we will leave that for you to discover as music this good, this emotionally involving and powerful should be experienced first hand without any preconceived notions, what we will tell you is what Gevaudan bring,to the altar, with songs entitled "Dawntreader", "Maelstrom", "The Great Heathen Army", "Saints of Blood" and "Duskwalker", are dynamics that range from a whisper to a roar, grooves that can seduce with a gentle caress then leave you reeling with the ferocity of their attack.

"Iter" is an album that will appeal to both the traditional doom crowd and those that like their doom a little on the blacker side, an album that leans towards prog in places yet at the same time stays true to the basics of its doomic roots, an album that's not quite a masterpiece but comes damn close.
Check it out …..
© 2019 Frazer Jones
Posted by Desert Psychlist at 04:41