Bath, UK's Eyes Fly, started life as two man project conceived at an all day doom fest by Peter (guitar) and Gaz (drums) , two West Country residents brought together by a mutual love of doom and heavy noise in general. Realising that, to really bring to life the sound they were hearing in their heads, the duo needed to become a quartet the pair soon recruited in Tom on bass and Dean, from Gaz's previous band Valfader, on vocals. With Eyes Fly now a four piece the band set about writing tunes that would best utilise their newly expanded line-up and showcase their bigger more dynamic sound, the results of which can be heard on the bands debut release "The Long Return". 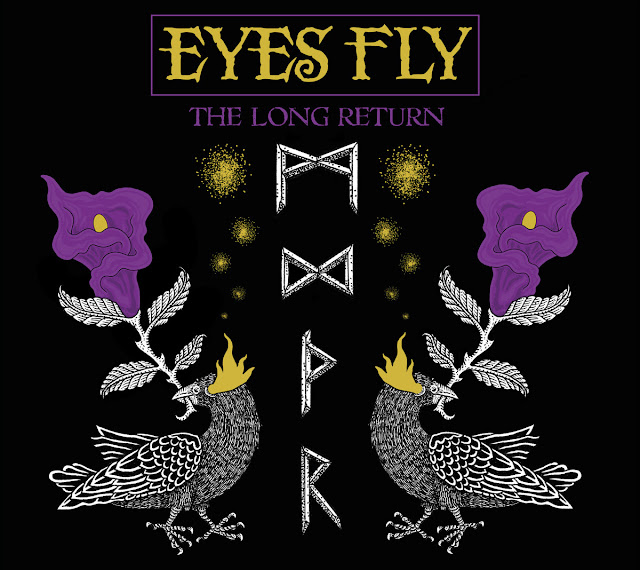 Prog, as a genre/style of music, has had its denigrators over the years, so much so that prog's overblown nature was cited as the reason (blame in some circles) for the emergence of the back to basics movement that culminated in punk rock. Prog however is a resilient beast and although dealt a devastating body blow by the likes of The Clash and The Ramones the genre was not fatally wounded and has slowly been clawing its way back, not so much in its own right but by integrating itself into other forms of music and genres, mainly at the heavier end of the underground rock scene. Eyes Fly are not what you would call an out and out prog band but their music does have progressive elements, elements of complexity and intricacy blended with a fair amount of old school hard rock swagger and bullish metallic stoner bluster.

First track "The Dead, Living" comes out of the gates with untamed force and feral ferocity, the band jamming a groove that is all crunching chords, growling bass and thunderous percussion before then settling down into a chugging metallic groove fractured by moments of blustering heaviness. Clean, grit edged vocals, that occasionally descend into harshness, soar effortlessly over these dark heavily fuzzed refrains telling their doomic tale against a huge backdrop of dark and addictive stonerized metallic groove.. So where is all this prog we hear you asking, well next track "She Who Rode" answers that question with a song that, in its initial stages, incorporates prog flavoured glistening arpeggios, complex chord structures and clean crystal clear vocals, the song slowly building in intensity and volume until finally exploding into a whirlwind of heavy doomic groove replete with swirling lead work, earth shaking bass and punishing heavy percussion with the vocals following suit with a harsher, growlier delivery. "Home Within"is up next and begins life with demonic wordless growling over shimmering percussion and then morphs into a laid back, almost post-rock, groove over which clean vocal tones tiptoe and skip melodically before the band up the ante and shift into stoner doomic territory with those harsher vocals once again rearing their demonic head over a raucous foundation of chainsaw riffage. "Eyes Fly" (the track) follows and closes the EP with a song that has an almost Opeth feel to it, thanks in part, to its thrumming, sometimes stuttering prog metal groove and its mix of clean vocal melodies and guttural growling, the song closing what is a very impressive EP that boasts a blistering and wholly entertaining mix of mesmerising prog metal and dank stoner(ish) doom 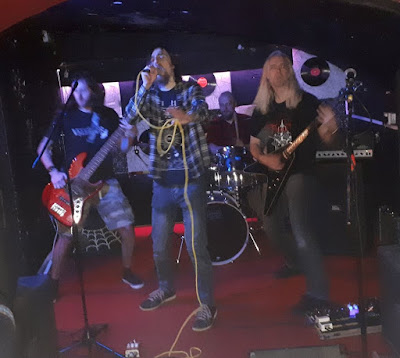 Progressive, raucous, delicate and doomic "The Long Return" is absolutely off the scale in the groove stakes, an EP that proves that intricacy and complexity can live quite comfortably hand in hand with brute force and power without the need to compromise to either.
Check it out....