What is "traditional doom" and how does it differ from the "epic doom" and "proto-doom" that it is often mentioned in the same breath with, well the truth is we don't really know. We at Desert Psychlist tend to use the hard and fast rule of dubbing anything with a sound similar in flavour to early Black Sabbath as "proto-doom" and anything with the grandiose richness of say Candlemass or Solitude Aeturnus as "epic doom" and then classing anything that falls in-between, and has an essence of both, as "traditional doom". Of course we understand that this is lazy journalism and that we are pandering to peoples need to compartmentalize their music but then try sitting down to write a review of an album and NOT do something similar. it's damn hard. Why are we mentioning this you may ask, well today we are reviewing "The Oath" (King Volume Records/ Kozmik Artifactz) the new album from Californian doom combo Lord Mountain an album that falls firmly into that "traditional" box we have lazily created for it but in truth is so much more, an album our old Doom Charts pal Bucky Brown probably sums up best with his Bandcamp blurb for "The Oath" where he calls the album "too metal for doom but too doom for metal". 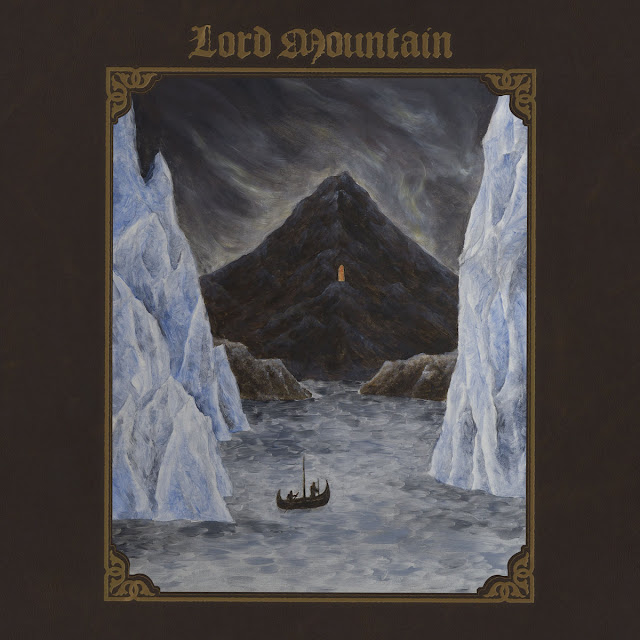 "The Oath" is an album packed heavy with all cliches you could hope to hear on a release with its feet in the camps of both heavy metal and doom, fantasy inspired lyrical content , reverberating guitar riffs, neo-classical flavoured solos, tight, but flexible, rhythms and powerful clean theatrical vocals, Now given this information you might expect the word "generic" to pop up somewhere in this review but we can assure you that it will not and the reason it will not is because Lord Mountain bring a vigour and freshness to traditional flavoured doom the genre has been long lacking. You can go through "The Oath" track by glorious track and easily find nods to all the greats of doom, such as Black Sabbath, Pagan Altar, Trouble and Candlemass, but you can also find in its makeup essences of dooms new breed of "traditionalists" like Green Lung, Sleepwulf and Parish, and it is this blending of old school grandiosity and new school occultist swagger that makes "The Oath" such a breath of fresh air. Songs like "Well of Fates", "The Last Crossing", "Serpent Temple" and title track "The Oath" are not just a celebration of dooms past but also examples of how doom in its purest form is still as relevant today as it was before the genre became swamped in waves of harshness and brutality. "The Oath" recalls a simpler time when "sludge" was just a descriptive term for industrial waste and "blackened" referred to a cooking process using spices, however the grooves Jesse Swanson (guitars and vocals), Sean Serrano (guitars), Andy Chism (bass) and Pat Moore (drums) present to us with their new album should not be considered "retro" as they carry too much originality, "vintage" (something that represents the best of its kind) would be a far, far better description. 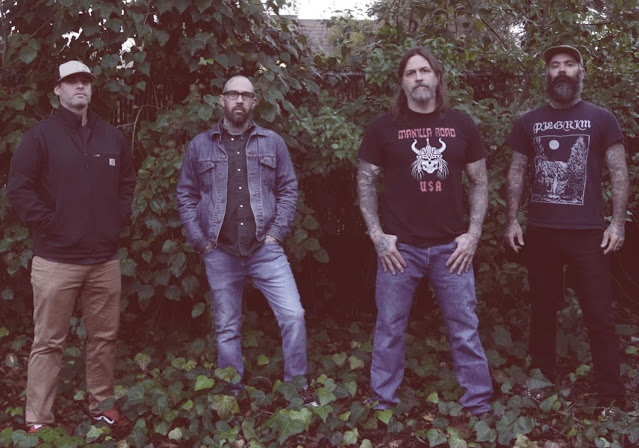 "The Oath" is an album that will appeal to those that cut their teeth on bands like Witchfinder General, Pagan Altar and St. Vitus as well as those working their way back from newer bands like Spellbook, Inner Altar and Dawnrider. Lord Mountain play doom the way doom used to be played, they are not trying to re-invent the wheel with "The Oath" they are just attempting to put a new tyre on it.
Check it out ....
© 2023 Frazer Jones
Posted by Desert Psychlist at 04:35