Desert Psychlist came to Spain's Rosy Finch via the bands 2015 album "Witchboro" and to say it blew us away would be a gross understatement, eagerly we awaited a follow up but, apart from the impressive "Sunset Acoustic Sessions Vol,1" (alternate versions of songs from the band debut EP "Wolves Waiting" and the album "Witchboro") nothing was forthcoming until 2020 when the band released "Scarlet". "Scarlet" was almost wholly guitarist/vocalist Mireia Porto's baby and was a lot more visceral and a lot heavier than "Witchboro" and allowed Porto to explore some of the same dark territories she had experimented with during her short tenure with, what had been her second band, Hela. Much like "Witchboro", "Scarlet" was warmly received but even as it was being recorded so the line -up was changing with Porto recruiting Óscar Soler (formally of Pyramidal) on bass and Juanjo Ufarte (from Grajo) on drums and it is this line up that brings us "Seconda Morte" the latest instalment in the ongoing Rosy Finch story. 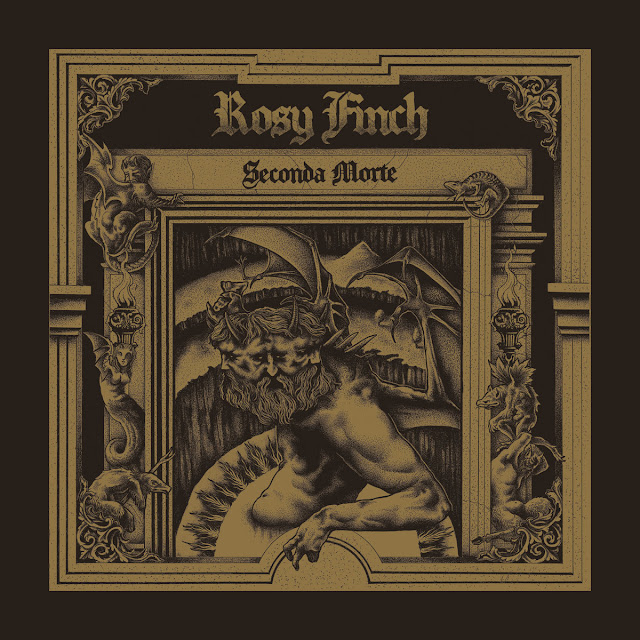 "Seconda Morte" is a concept piece based on Dante Alighieri's 14th century poem "The Divine Comedy" a poem that tells a story of a soul's journey through hell, purgatory and heaven, a poem that Porto had been reading prior to writing and recording the lyrics and music for this release. There are just four songs on "Seconda Morte" with each representing a chapter in Dante's journey from a crisis of faith to sudden understanding, the first "Selva Ocura" is more a tone piece than a song, an instrumental composition made up of synthesised effects, raked strings and randomly plucked arpeggios meant to mirror Dante's loss of way and confusion, it's an eerie piece but oddly beautiful at the same time. Next up is "Inferno", now you might think that a song dealing with a stroll through the horrors of hell might come straight out of the blocks spitting fury and flame, but Dante's hell is an insidious hell that can be as seductive as it can be treacherous, and so Porto reflects this by allowing the music to soar and swoop between restrained and sinister and thundering and threatening, her voice a comely whisper one minute a whirlwind of screeching fury the next, her guitar playing following a similar pattern with Soler's bass and Ufarte's drums holding it all together beneath her. "Purgatorio" is our next stop on the Dante express and here we have a song that harks back a little to the bands "Witchboro" period in that it finds the band jamming an occult rock flavoured groove with Porto opting for a much more waifish and clean vocal dynamic that gradually shifts to an impassioned roar as the intensity of the music increases. Every journey ends somewhere and where better to end a journey than in paradise, or "Paradiso" as it is called here. though don't get to thinking you will be hearing a host of angels singing, harps being gently plucked or Gabriel getting modal on his horn, this is Rosy Finch remember and that is not how they operate. What you do get is moments of lysergic serenity trading places with moments of gritty heavy rock and metal slowly transitioning to a lone ethereal vocal wafting majestically over acoustic guitar, a brilliantly put together piece of music, expertly delivered by three extremely talented musicians, that has the ability to pin you to a wall with its ferocity while at the same time sending shivers down your spine with its unconventional beauty. 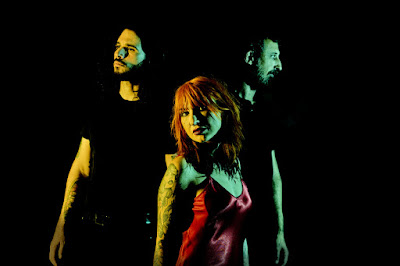 Rosy Finch have taken a huge gamble in taking such an iconic and celebrated piece of literature and presenting it in the context of a rock album, but it is a gamble that has paid off. Those that have never ever heard of Dante and think The Divine Comedy is a show they've missed on Netflix will still have the undulating mix of dynamics, the crunching riffs and thundering rhythms to enjoy while those familiar with the Dante will have all of the above but also the added enjoyment of seeing how the band interpret his poem, which makes "Second Morte" a win/win situation for all involved.
Check it out ....
© 2022 Frazer Jones
Posted by Desert Psychlist at 06:07