When Desert Psychlist first heard Swedish alternative/stoner combo Gaupa's self-titled debut back in 2018 we have to admit it was a case of love at first listen, and that love reached almost biblical proportions with the release of "Feberdröm" in 2020. Now with all things against the middle, and given the warm reception it was getting from all the "right people", "Feberdröm" should have seen Gaupa's name being mentioned in the same breaths as some of those of the underground's upper echelon. Unfortunately, that didn't quite happen thanks in part to "Feberdröm" being released while the world was in the throes of a global pandemic, which made it a little difficult for the band to give the album the push it deserved. There is a saying that goes "the cream will somehow always rise to the top" and that is certainly true in this case because one of those "right people" listening to the album turned out to be Jens Prueter, head of A&R Nuclear Blast Records Europe who immediately signed them for his label. So, with the power of a major label behind them and with new album, "Myriad", just released Gaupa are now back on course for world domination. 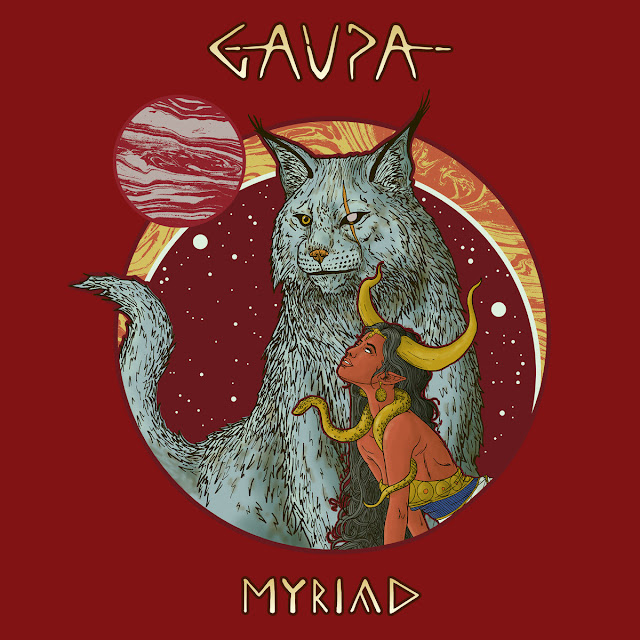 Gaupa, Jimmy Hurtig (drums); Daniel Nygren (guitars); Erik Sävström (bass); Emma Näslund (vocals) and David Rosberg (guitars), create a special sound together, a sound that may have its roots in stoner/hard rock but is not typical of the genre, a sound that also contains elements of heavy psych but would be a push to call "psychedelic". Probably the closest you could get to describing the music inhabiting "Myriad" is that it is some sort of off centred prog/stoner/alternative rock hybrid but even that description falls short of the mark as first track "Exoskeleton" will attest to. "Exoskeleton" begins straightforwardly enough, with Näslund vocalising in majestic elfish tones over a strident, raucous and fuzzy stoner rock groove, but then at just over the midway mark all sorts of weird and wonderful things start happening with swirling electronic effects and complex prog-like guitar solos vying for dominance with off centred rhythmic patterns and low funky bass lines, the band then reprising the songs initial groove in a final, somewhat more manic, dash to the close. "Diametrical Enchantress" follows and sees Nygren and Rosberg chopping out stuttering angular refrains ably supported by Sävström and Hurtig, Näslund delivering a vocal that is almost straight in comparison to her usual Bjork-like crackle and pop. Gaupa dial things down a notch or two for next song "Moloken", an atmospheric and utterly beautiful hazy blues tinted tome that balances out its occasional heaviness with restrained rhythmic patterns and shimmering guitar textures with  Näslund's vocal routinely rising from a whisper to a wail in response. "RA" sees Gaupa jamming a groove that begins its life soothing and serene but then slowly takes on a more aggressive stance, both musically and vocally, as it nears its last note. "Elden" follows a similar path to its predecessor but adds a little more eastern flavoured dissonance into the mix while "My Sister Is A Very Angry Man" is quirky, off kilter and just damn rocking. Next up is the "Sömnen" a fey and folky number featuring just voice and acoustic guitar, Näslund sings the song in her native tongue and never has the Swedish language sounded so fragile, powerful, seductive and beautiful as it does here. Final track "Mammon" begins with a groove that would not sound out of place in a modern dance club, it has the feel of something a DJ might spin to build the tension before the beats slam down and everyone goes crazy, only when the beats DO go down on this, they are not computer-generated bass and drum loops but fuzzy refrains and punchy rhythms played by real living breathing musicians with a unique and distinctive vocalist at their helm. 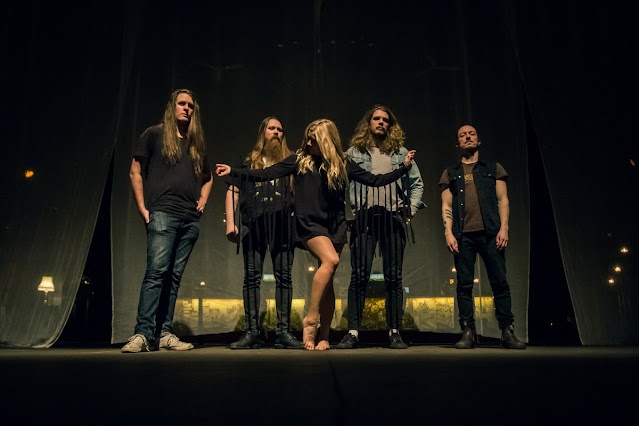 "Myriad" is not just a good album, its a GREAT album that is a heady mix of the straightforward and the unconventional played by a band who see music in colours and shapes rather than just notes and chords. If you are planning on going to see Gaupa play live in the near future, then it would be advisable to go see them while they are still playing clubs and tickets are still reasonably priced because this is a band with a bright future in front of them.
Check 'em out ....

Posted by Desert Psychlist at 05:38