It was 2007 when Washington D.C.'s Borracho first pinned our ears back with their raucous blend of stoner fuzz and hard rock bluster and since that date the band have hardly put a foot wrong. The trio, who incidentally began life as a quartet, have consistently delivered the goods and in doing so have built themselves a reputation that is the envy of many of their peers. Tim (bass), Steve (guitar/vocals) and Mario (drums) are not names you will see regularly topping those best in their instrumental field polls but together these guys make a noise that will see any album they release almost guaranteed to feature in many of those end of year lists so beloved of this underground scenes movers and shakers. The bands latest release, "Pound of Flesh" (Kozmik Artifactz) has just been released and Desert Psychlist has already placed it high on ours. 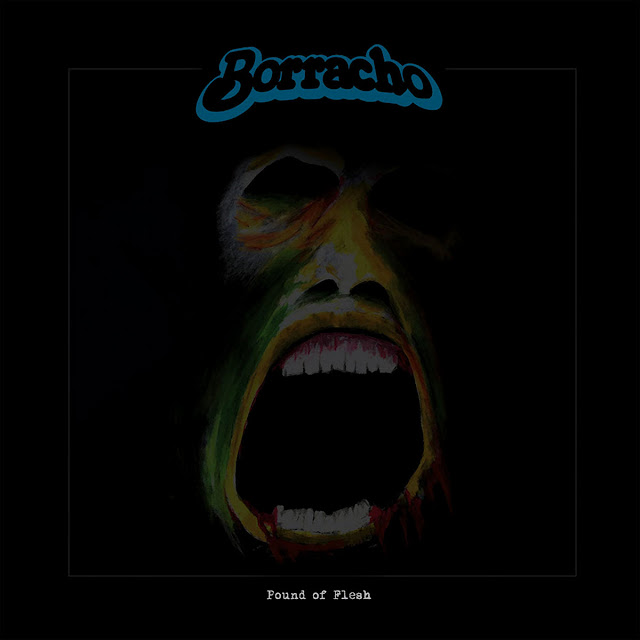 Things start well with "Holy Roller" a song blessed with one of those stuttering desert grooves guaranteed to hook you in and keep you hooked until its final note, raucous, gritty and coated in vocals of a similar nature this song doesn't just blow the doors to Borracho's new album wide open it takes the wall's down too. Borracho are firm believers that once you've got an audience's attention then you should do your utmost to keep that attention and so the stuttering groove of opener "Holy Roller" is replaced by the circular riffage of "It Came From The Sky" and we are plunged headlong into another maelstrom of overdriven and fuzzed out sci-fi themed grooviness driven by thunderous percussion over which we are asked the question "whatever happened to the land of the free", the songs lyrics, although being penned prior to Covid, tying in nicely with the world's current health crisis crisis. "Caravan" finds Borracho tinting their desert fuzziness with a little doomic dankness with a refrain that owes a small debt to Led Zeppelin's "Kashmir" in that it is built around recurring eastern motif and has a similar orchestral feel, the song also boast an unbelievably strong and emotive vocal that brings a real sense of gravitas to the songs lyrical tale of hopelessness and adversity. "Dreamer" follows, a brief but beautiful oasis of Floydian instrumental tranquillity that allows the listeners time to reflect and to catch their breath before the hammer goes down again and the band explode into the raucous desert/stoner riff fest that is "Judgement Day". A sample from Naughty by Nature's "Here Comes The Money" introduces next track "Dirty Money" before the band explode into a filthy up-tempo southern tinted blues groove dripping with equally dirty distortion and fuzz. "Year of the Swine" is a heavy stoner rock workout decorated in throaty vocal  tones that along the way manages to briefly throw in the riff from Black Sabbath's "Paranoid" while "Burn It Down" reflects its title by starting out gently smouldering then erupting into a furious blaze of  gnarly riffage and punching percussion draped over a gritty preacher in the pulpit type vocal. Finally we arrive at "Foaming At The Mouth" a weird but quite addictive instrumental built around a repeating refrain that trades in its vocals for a series of politically themed samples and movie/TV soundbytes. 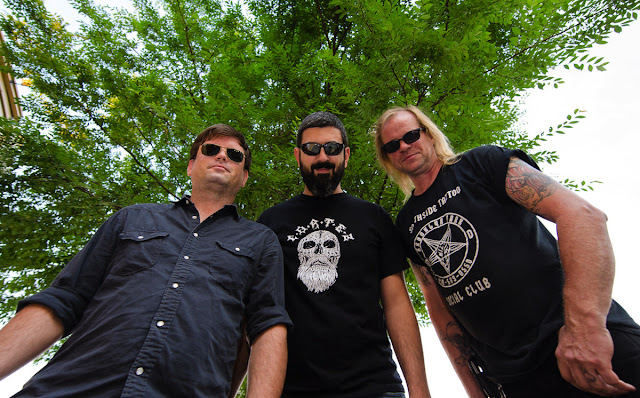 "Pound of Flesh" is not a radical departure for the band nor is it a carbon copy of what has gone before, Borracho's new album is what we all want it to be and that is a stonkin' collection of raucous rock'n'roll songs played loud, proud and fuzzy.
Check it out .....
© 2021 Frazer Jones
Posted by Desert Psychlist at 11:57