Grande Fox are Nikos Berzamanis (vocals); Lefteris Zaoskoufis (guitar); Dimitris Loukas (drums) and George Chaikas (bass), four angry, frustrated young men sick of the corporate greed that forces them to struggle to survive in a money orientated world and weary of taking two steps forward only to be pushed three steps backwards every single day of their lives. This is a band who have had enough and want to tell us we don't need to take it anymore and that there is another way, "Do Not Obey! Revolutionize Your Consciousness" is the lesson they preach and their manifesto for a better life is set out for all to hear on their stunning new album "Empty Nest" 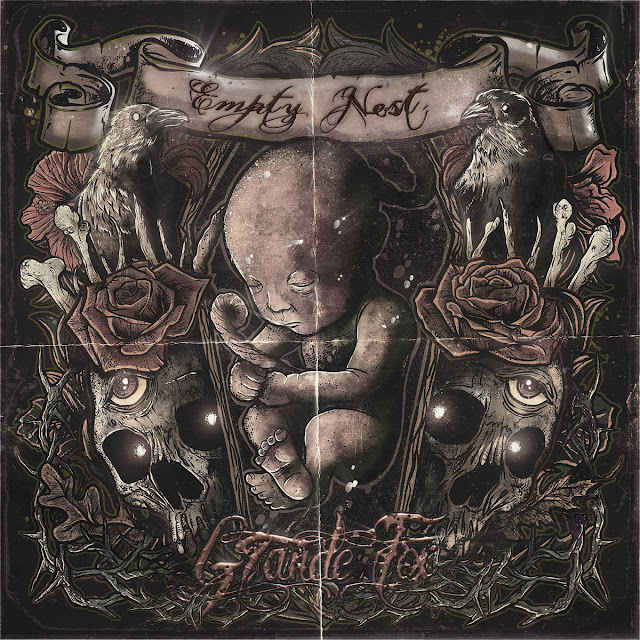 If you are a fan of Rage Against The Machine, Monster Magnet, Clutch and Planet of Zeus then Grande Fox's "Empty Nest" is your musical wet dream turned reality, a mish mash of metallic hip-hop, spaced out southern metal and good old stoner/hard rock melded together in an enthralling hybrid of groove and growl. From the opening salvo of "Backstab", with its impassioned screams of "i can't take this anymore" roared over a groove that constantly shifts back and forth between strident and rocking to liquid and lysergic, right through to the schizophrenic "Birth of an Embryo" with its loud/quiet/loud dynamics and mix of rhythmic raps and soulful croons, no quarter is given each song a mini tour through the history of rock from the blues up until the present day. Not just content to shoehorn a world of rock into their sonic attack Grande Fox also furnish their grooves with aspects of R'n'B, Hip -Hop and Funk and they manage to do this without once ever sounding like they are just paying lip service to those genres. Anger plays a huge part in the lyrical content of the eleven songs that make up "Empty Nest", some times this anger presents itself as up in your face fury sometimes it is presented subtly and leans towards the observational but whatever way it is presented that anger is always there and without it Grande Fox would not be the band they are and "Empty Nest" would not be the superb album it is!

Politics is always a sticky subject when it is coupled with music as it is inevitable that if a band/artist has certain political beliefs and ideologies and then promote those beliefs and ideologies in their music and lyrics then they are bound to limit their appeal to a mass audience, some of whom may have opposing political beliefs. However if a band /artist feels strongly enough about the political environment they find themselves living in then isn't it right that they should be able voice their opinions without fear of recrimination or censorship especially when that anger is righteously directed at the racism, discrimination and other social injustices that have so blighted any hopes we have ever had of living a harmonious existence.
Do yourself a huge favor and give Grande Fox's "Empty Nest" a spin  it'll open up your mind, make you think and maybe just give you the impetus to start revolutionizing your own consciousness.
Check it out .....
© 2021 Frazer Jones
Posted by Desert Psychlist at 13:04