Music delivered within the confines of the desert/psych/doom scene is often judged on the power of its riffs, how many times have we heard someone mention "the power of the riff" or post "all hail the riff" on social media? Strangely when an album comes along brimming over with said riffage, minus any vocal contributions, many of those same people bemoan the lack of a vocalist, we live in strange times people. However, for those who like their riffage occasionally unadorned by vocal pyrotechnics or guttural growling there are a few really good bands out there whose whole reason for existence is to bring those riffs to the fore and truly celebrate their power.
Brugge trio Atomic Vulture, Pascal David (guitar), Kris Hoornaert (bass) and Jens Van Hollebeke (drums), are one such band and having already wowed and amazed us with their stunning instrumental debut "Into Orbit" they are now about to blow us away once again with their second release "Stone of the Fifth Sun". 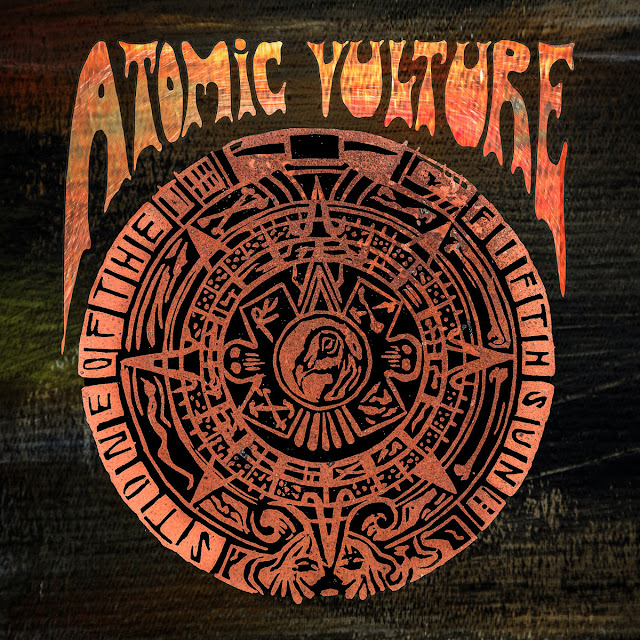 To be fair to Atomic Vulture the sound they create together is an not unending stream of bass and guitar refrains piled one on top of the other, there is much more depth and complexity to be found here amidst the crunching chords, growling bass and pummelling percussion that inhabits much of "Stone of the Fifth Sun". First track "Jaguar" is a prime example of the blend of crunch and complexity that is Atomic Vulture's modus operandi, and sees guitarist David firing off a stream circular refrains and swirling lead work over,in and around a virtual tsunami of groove expertly provided by Hollebeke's powerful, insistent percussion and Hoornaert's grizzled, growling fuzz drenched bass. "Wind" then follows and the lysergic aspects and elements touched on in the previous track are expanded a little further, this time underpinned by touch of desert flavoured grooviness and melancholic bluesiness, Did we mention Atomic Vulture bill themselves as an instrumental band? Well next track "Rain" blows that statement out of the water with a stonkin' desert/hard rock groove coated in clean, strong and superbly executed VOCALS! "Water" finds the band back in instrumental mode jamming a slightly eastern tinted groove replete with exotic scales and motifs before Hoornaert's deliciously effective bass line leads them off on a tangent into heavy psych territory. "Earthquake" then closes things with the band hitting a groove that is part Kyuss, part Earthless and part Colour Haze yet despite this is totally and wholly ALL Atomic Vulture. 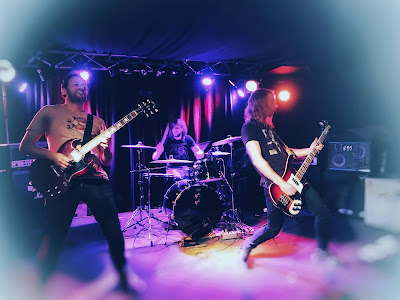 Put away your reservations concerning instrumental rock music and give this excellent new release your full and undivided attention,"Stone of the Fifth Sun" is an album that delivers on all levels and that is reason enough to go
Check it out …..