DOOMICIDAL ~ SHADOW OF THE GALLOWS ...... review

From the apple flavoured mists of a Somerset dusk emerge three men dressed in a variety of dark attire, three elders of the doomic altar with tales to tell, tales that will cause eyes to widen and spines to shiver, tales they tell while sipping rough cider from earthen jugs beneath the looming shade of the gallows their lifeless bodies will soon be dangling from.
Well not exactly but it seemed a poetic way of describing the doomic themes and lysergic imagery of West Country trio Doomicidal's debut album "Shadow of the Gallows", a seven song opus that has its roots set firmly in traditional doom but its branches spreading out into the full gamut of doomic sub-genres and rock styles. 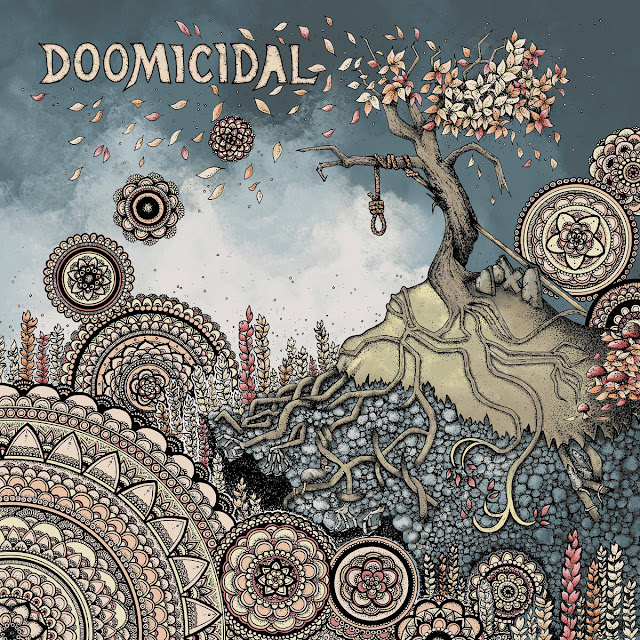 Doomicidal, Roger Densham (bass), Migo Gage (guitar/vocals) and Barney Clements (drums), are not exactly what you would call spring chickens but neither could they be considered elder statesmen either. There are high levels of vibrancy and vitality to be found within the grooves of "Shadow of the Gallows" that many of the scenes younger guns could only wish to aspire to but there is also a fearlessness that comes with age and experience. Doomicidal do not need to set their stall out to capture a specific demographic, these guys are long enough in the tooth to know that trends tend to come and go so instead spread their net wide enough to capture elements not only from the full doomic spectrum but also from music genres further afield. Hawkwind-ish space rock, 70's proto bluster, heavy folk metal and blackened doom are all explored and are all delivered with equal expertise, driven hard by Clements solid, tight percussion and Densham's earth shaking bass and enhanced by Gage's crunching riffs and swirling solo's. Over these grooves of various doomic shades are delivered vocal tones that range from clipped and gothic ("Hangman"), manic and sinister ("Rats In The Wall") to blackened and harsh ("Autumn") with a guest vocal, from fellow West Country pal Cookie Turvey, giving an almost theatrical vibe to "Bride of Baphomet", the differing and diverse array of vocal stylings bringing a whole different dynamic to each individual song and in turn giving the whole album an added dimension of interest. 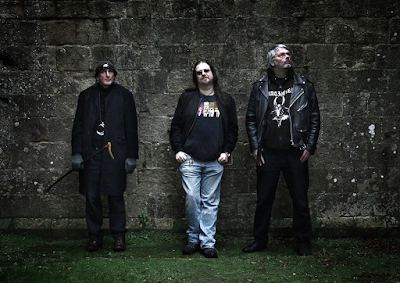 Despite the dark gothic lyrical imagery, that permeates every pore of "Shadow of the Gallows", there is an Englishness to Doomicidal's sound that gives their new album a slightly eccentric and left of centre feel and it is this off centeredness that is its greatest asset and makes "Shadow of the Gallows" such an enjoyable and rewarding listen.
Check it out ….