Ripple Music, are fast becoming the go-to label for quality, 70's influenced, hard/stoner rock so it came as a bit of a surprise to some when Todd Severin announced that Ripple were stepping outside of their comfort zone and signing French post-rock/sludge exponents Los Disidentes Del Sucio Motel to the label.
LDDSM are, Nico - Guitar/Vocals, Julien - Bass/Vocals, Romain - Guitar, Greg - Drums and Dany - Keyboard/Vocals, five guys from Strasbourg, France who have been strutting their brand of fuzz heavy rock around Europe since 2005 and in that time have released two full length albums "Soundtrack From The Motion Picture" (2010) and "Arcane" (2013) . This year (2016) sees the band releasing their third and latest album "Human Collapse" (Ripple Music). 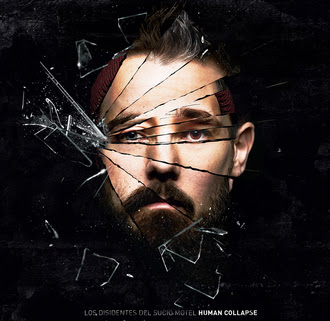 LDDSM are a completely different beast from the wide eyed stoners that made "Soundtrack From The Motion Picture", the Kyuss -like grooves and QOTSA quirkiness that were the hallmark of their sound back then still remain but are buried under a heavier more post-rock groove. 2013's "Arcane" went some way to heralding this new direction with it's harder edged riffs and earthier vocal tones but "Human Collapse" sees the transformation from punky desert urchins to post-rock sludge monsters come to completion. Darker, both musically and lyrically, than previous albums "Human Collapse" is an exhilarating listen, if not a little disturbing in places, and shows a band willing and unafraid to throw caution to the wind and take a few chances.and having taken those chances..then pull them off!

Posted by Desert Psychlist at 12:22