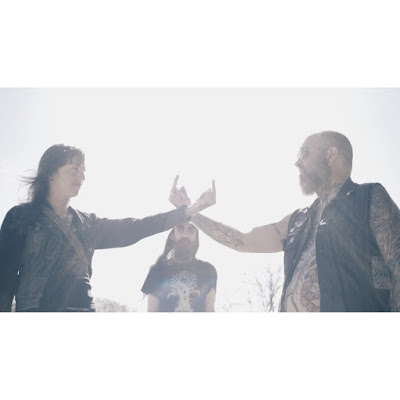 Uzala are a band who seem to have slipped under the radar of the "underground" scenes movers and shakers on the interweb. The trio of Chad Remains ~ Guitar & Vocals, Chuck Watkins ~ Drums and Darcy Nutt ~ Guitar & vocals from Boise/Portland have consistently delivered quality both in the live arena and in the studio. The band and  have released two albums "Uzala" and "Tales of Blood & Fire" since their conception in 2009 as well as an EP and a split single with Mala Suerte and have just released their first live recording "Live At Roadburn 2015" via Roadburn Records. 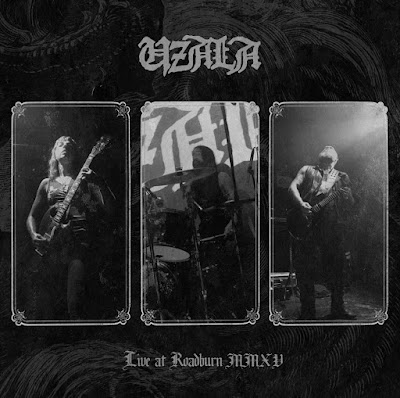 Recorded at the Roadburn Festival in Tilburg, Netherlands " Live At Roadburn 2015" sees Uzala as a band who not only can produce the goods in the studio but are also a band quite capable of recreating that quality on stage also.
Drawn mostly from 2013's "Tales of Blood & Fire" and with the addition of 2012's  single "Death Masque" and new (to me) songs "The Gallows" and "Shores" "Live at Roadburn 2015" just throbs with intensity.
"Countess", already a big favourite of mine, takes on even more epic proportions live, deeper, darker it seems to take on a whole new dynamic with Nutt's vocals soaring majestically  above the wall of doom being laid down behind her, the occasional feedback and white noise emitting from the guitars adding rather than detracting from the songs overall impact.
"Seven Veils" is lifted above it' slightly pedestrian original (it was my least favourite on the last album) by being infused with a thicker, doomier dynamic that gives the song a whole new lease of life, the guitars are punchier more in yer face creating a wall of sound over which Nutt's enigmatic dark tones reach their full potential.
"The Gallows" sees Uzala step up the pace a little hitting a groove a little more traditional than their usual fare but nonetheless containing the same levels of dark intensity that colour the rest of the albums content
"Dark Days" another highlight from "Tales of Blood & Fire" sounds even more menacing than its original studio recording, Nutt's voice emitting a dark  mournfulness and anguish against the songs backdrop of sinister doom. This song really excels within the live context and for me is the highlight of this recording.
"Shores" is a wonderful doomy torch song that if sang by anyone else other than Darcy Nutt may well of wandered into symphonic territory but is saved from this fate by the glorious darkness of her vocal delivery and ably backed up by the stunning musicianship of Remains and Watkins and the lady herself.
"Death Masque" closes the album and the performance with an absolute stunning display of musicianship and vocal athletics, guitars screaming and wailing over  waves of percussive thunder taking what was essentially the B-side of a single and turning it into something truly epic. Mostly instrumental with just a smattering of vocals it ends with a delicious whirlwind of noise and feedback.
Live albums can be hit and miss and there are those who will just dismiss them out of hand but some are exceptional snapshots of bands doing what they were born to do. This is one of those!

Posted by Desert Psychlist at 11:46