Want something with more hooks than a butchers storeroom, more crunch than a head on collision and is grittier than a wet fish on sand dune well look no further Desert Psychlist has the answer to all your needs. Dave Russell (vocals), Woogie Maggard (guitar), Anthony Belluto (guitar), Gabe Fonseca (bass) and Ben McDowell (drums) are Desert Suns a five piece combo from San Diego who, much like their hometown contemporaries Red Wizard and The Great Electric Quest, jam grooves that combine elements of old school 70's rock. blues and metal with those of today's stoner/desert and psych scene. Desert Suns first came to Desert Psychlist's attention with their self titled debut "Desert Suns" but then seemed to slip off our radar until suddenly reappearing on chapter 5 of Ripple Music's "Second Coming of Heavy" EP series sharing the bill with Chiefs (now known as King Chiefs). The band return this year with a brand new album "Carry On" (Electric Valley Records) so hopefully they will remain a little longer on our radar this time around. 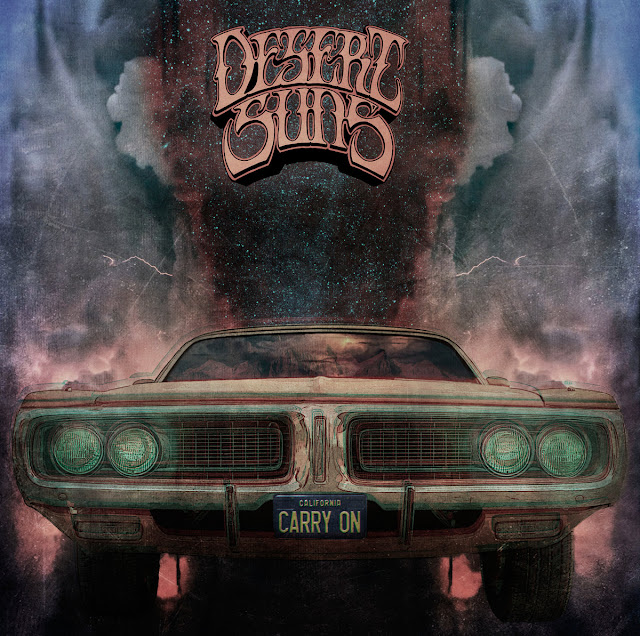 Title track "Carry On" kicks things into gear with a song that mashes Kyuss' generator party type desert grooviness with the proto-doomic swagger of Black Sabbath, Russell telling us of "chasing despair" and about "the voices in your head" in strong clean, slightly weary, vocal tones. The band dive deep into blues territory for following track "Sinking Like A Stone", Fonseca laying down deep booming bass lines complimented by McDowell's slightly restrained but highly effective percussion and guitarists Maggard and Belluto's mix of crunching chords and soaring solo's, the track also sees a guest appearance from Red Wizard's Travis Baucum on harmonica his wailing blues harp the perfect foil for Russell's impassioned vocal. Next up is"Slip of the Tongue" an upbeat blues rocker with an infectious vocal melody and a recurring guitar hook you could hang a coat on. "Right This Way" then finds the band easing back on the throttle and getting a little laid back, lysergic and genteel while "Wish It Away" sees the band taking the lysergic elements of the previous track and mixing them up with some old fashioned heavy blues swagger. "Judgement Day" revisits the proto-doomic elements of the albums title track both musically and lyrically before the band brings things to a close with "Feast of Flesh", a song that sees guitarists Maggard and Belluto trading licks, riffs and solo's over and around a grainy heavy doomic voodoo blues groove expertly anchored by Fonseca's thundering bass and McDowell's powerful drums, Russell singing of  the beast hidden within us with a knowing clarity and passion. 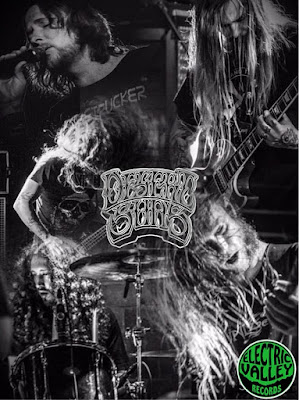 Probably a little less metallic than The Great Electric Quest and maybe a tad more blues orientated than Red Wizard, Desert Suns do however still share a common denominator with their San Diego brethren and that is their ability to make music that has its roots in the classic and hard rock of the past yet is still very much of today and new opus "Carry On" is testament to that.
Check it out ….