Somewhere in North Carolina a gathering is happening, The Horned One has summoned his acolytes to partake in a ceremony to celebrate the beginning of the end times, inviting his malevolent horde of malformed and maladjusted disciples to strut their stuff as humanity slowly spirals into apocalyptic chaos, tonight my friends..... the demons dance.
Ok that is not exactly true (apart from the mention of North Carolina), what we at Desert Psychlist are really trying to do here is flex our journalistic muscles to prepare the stage and set the scene for an EP that has a dark occult(ish) feel and crunching  proto-doomic flavour, that EP is entitled "Demon Dance" and the band are called Cosmic Reaper. 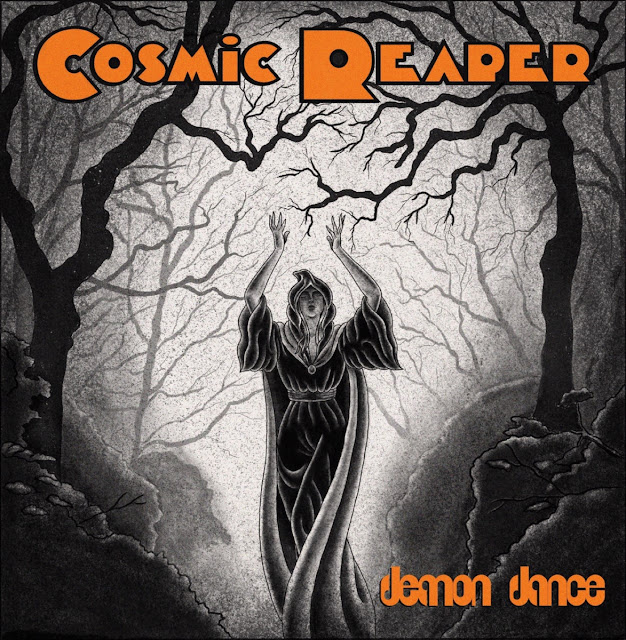 If you are not a fan of Uncle Acid and the Deadbeats psychedelic doom endeavors and have had your fill of Sabbathesque proto doomic riffery then maybe now is the time to stop reading however if the mention of those two bands evokes an onset of uncontrollable drooling then your in for a treat with "Demon Dance". Charlotte, North Carolina's Cosmic Reaper do not try to put on any airs and graces or try to pretend they are the next big thing, they don't want to be the new Elder or Tool they just want to lay down some damn good doom and have some fun while doing it. Now you may be thinking that that sort of mind-set doesn't show much ambition, well you would be wrong as although Cosmic Reaper might not be chasing world domination they do want to be the best at what they do and what they do is grind out some mightily impressive doomic grooves. From the delightfully dense and heavy instrumental "Subintroeo", with its powerful percussion and thundering reoccurring fuzz drenched riff, to title track and closer "Demon Dance", with its clean ,almost buried in the mix, vocals, crunching circular refrains and brief but highly effective solos, there is not a minute or nano-second you will regret pushing the play button on this little gem of an EP! 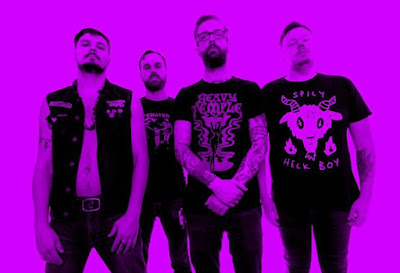 Going back to our tongue in cheek intro to this review, if the Angel of the Bottomless Pit really did need a soundtrack for his end-times shindig then he wouldn't be going far wrong if he started spinning Cosmic Reaper's " Demon Dance" on his flaming decks of steel, the Horde would be going ballistic!
Check it out …..