Bands containing siblings tend to have a hard time of it, not only do they have to deal with all the usual issues of ego's, personality clashes and the like but they also have to contend with rivalries that may have begun as far back as the nursery. The Kinks, The Black Crowes, Oasis and Kings of Leon have all, to some degree, suffered from the effects of sibling rivalry with those effects resulting in at least three of those bands calling it a day and going their separate ways at some point. Imagine then that all your band are related by birth and having to tour thousands of miles from your native home and then forced to share buses and hotels, those sibling pressures must become tenfold!
Australia's Stonefield are a band made up of four sisters, Amy Findlay (lead vocals/drums), Hannah Findlay (guitar/backing vocals), Sarah Findlay (keys/backing vocals) and Holly Findlay (bass/backing vocals), Desert Psychlist doesn't know what coping methods the band use to combat their inevitable rivalries (all families suffer them not just musical ones) but what ever those methods are they must be working as since their inception the band have released three well received albums, supported Fleetwood Mac on a world tour and even graced the John Peel Stage at the iconic Glastonbury Festival.
Stonefield have just recently released their fourth album "Bent" (Flightless Records). 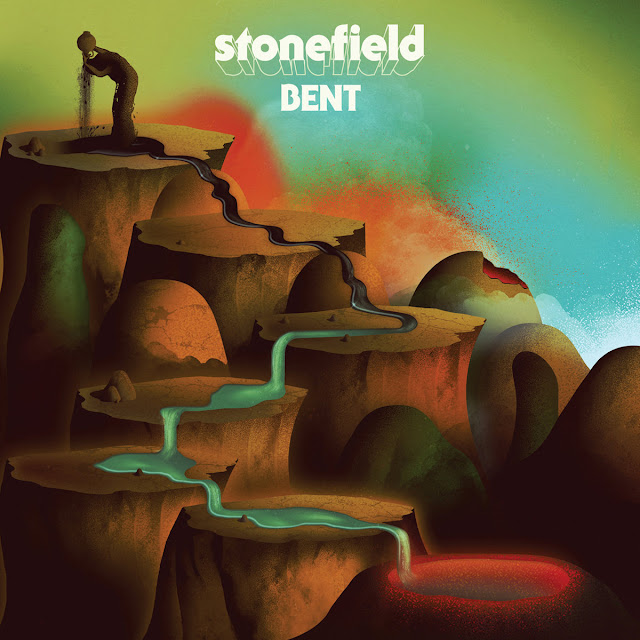 "Bent" was recorded over a five day period in a Melbourne studio, recorded almost 100% live with the help of fellow Aussies Joe Walker and Stu Mackenzie from King Gizzard & the Lizard Wizard. The band wrote most of the material while trekking around the USA on tour and the songs have an introspective feel, something that is borne out by drummer/vocalist Amy Findlay's statement that "Bent" "is a culmination of experiences, emotions, and stories collected over time", "a growth of honest, raw, energy that has been burning within us and waiting for its moment" All well and good you might say but what does all this inward looking amount to soundwise? Well the answer to that question is that Stonefield have, with "Bent", made their best album to date. From the opening salvo of grainy riffage that announces "Sleep" to the abrupt full stop that concludes final track "Woman" listeners are faced with an album that delivers on every level, an album that soothes and placates as much as it growls and antagonises. Amy Findlay's smooth vocal tones, backed by her sisters cool clean harmonies, waft waif-like over grooves that have an almost prog-like undercurrent thanks to Sarah Findlay's excellent keyboard flourishes and Hannah Findlay's mix of heavy and intricate guitar textures, Sarah and Hannah's wilder musical excursions only just kept in check by sister Holly's thundering on point bass lines and vocalist Amy's powerfully solid percussion. It would be hard to box Stonefield's sound in a neat little box  as there are elements to be found on "Bent" that, it could be argued, lean towards shoegaze-ish and indie and others where they sound like a hard stoner rock band with prog-ish tendencies, it is this diversity that is probably the bands biggest asset and why they are garnering such high levels of respect from both the critics and the record buying/listening public alike. 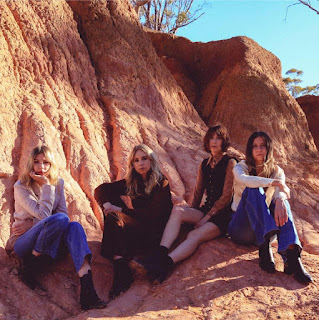 They say that the family that plays together, stays together, let's hope that is the case with Stonefield, losing a band this good, this vital because of some petty sibling quarrel would be a travesty, stay strong and stay true to each other sisters, we need you and we need your beautiful music.
Check 'em out