South London (or as we from East London call it... Bandit Country) is the home turf of a fuzz drenched little combo going by the name of Green Lung, the band, Tom Templar (vocals), Scott Masson (guitar), Andrew Cave (bass) and Matt Wiseman (drums), first drew the attention of the underground rock community with their 2017 two song demo "Green Man Rising". This year (2018) the band return to further abuse and damage our ear canals with their first official release, a four song EP entitled "Free The Witch". 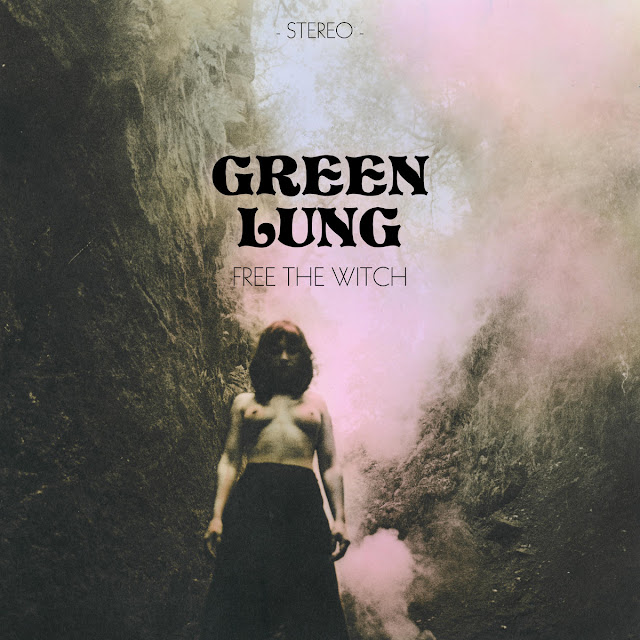 First track "Lady Lucifer" opens with a repeating guitar motif fractured by thunderous bursts of rhythm, its one of those intro tricks we've all heard before but one that still manages to peak the interest and get the juices flowing, The song then shifts into a crunching stoner groove flecked with bluesy colourings that settles into a menacing undercurrent when the vocals appear. Templar's vocals, clean,slightly nasal with an endearing swing to them, are the perfect foil for the heavy (but not brutal) grooves laid beneath them, his distinctive tones bringing an almost classic rock quality to the proceedings and giving the bands sound an extra level of occult(ish) gravitas. Title track "Free the Witch" sees the band expanding their sound by drafting in composer/arranger/producer and band friend Joe Murgatroyd on keyboards, his contribution giving their sound a deeper more expansive sound perfectly in keeping with the songs occultist themes. The song is taken to an even higher level courtesy of an absolutely blistering guitar solo from Masson, the guitarist ripping bluesy and noodling neo classical over a backdrop of swinging heavy groove superbly supplied by Cave's big growling bass and Wiseman's tumultuous percussion. The song is taken to a close with Templar chanting a Gregorian style mantra of "Malleus Malficarum" (translation: Hammer of the Witch) over a sinister backdrop of mournful keyboards, slow thundering rhythms and doomic guitar. "Living Fossil" is next and boasts an addictive circular groove over which Templar tells a story of everlasting existence, the vocalist stating "I have watched the ages come and go, never dying, living slow". The song then drifts into a brief psychedelic mid section, enhanced by Cave's funky bass line, before taking flight again and finishing as it started. Cave once again shows his bass playing prowess on "Older Than the Hills" his heavily effected bass motif the intro that announces its arrival.  The band here take a sharp left turn, initially dropping their usual heavy bluster for a more laid back approach with fractured chord progressions replacing those of a more power variety, slowly moving the song towards its conclusion via soaring solo's, superb vocal melodies and a superb array of diverse groove. 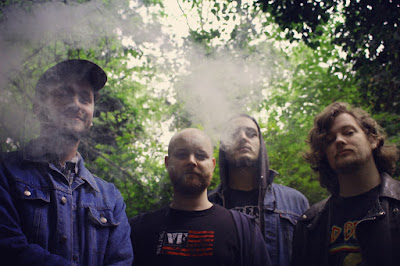 "Free The Witch" sees Green Lung considerably upping their game and adding to their armoury a deeper, fuller dynamic, If the bands demo "Green Man Rising" whetted your appetites for their brand of classy, fuzz drenched intelligent occult rock then "Free The Witch" is gonna blow you taste buds to smithereens.
Check it out .....