Twenty years is a damn long time in anyone's book but that was how long ago Puerto Rico's La Iglesia Atómica  (The Atomic Church) last played together. The band, whose line up has fluctuated quite drastically since their formation in 1990, were one of the leading lights of Puerto Rico's burgeoning rock scene and it could be argued were one of the early pioneers of today's stoner rock movement, their brand of fuzz soaked groove preceding the emergence of Kyuss and Sleep by a whole year. Agustin Criollo ( bass, guitar, keyboards and vocals) has been the one constant throughout La Iglesia Atómica's career and now with the recruitment of Martin Latimer (guitar) and Herb Pérez (drums) and the release of a new album "La Iglesia Atómica"( South American Sludge Records) the band are ready to ride again. 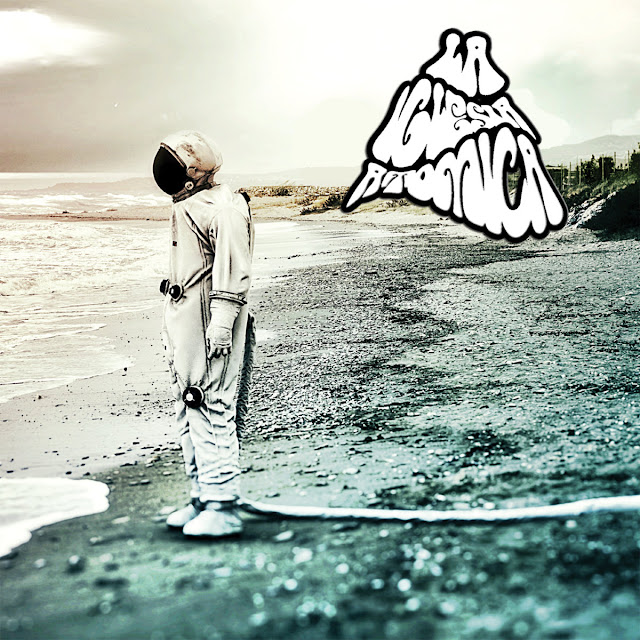 In the twenty years that have passed since La Iglesia Atómica last trod the boards of a live stage a lot has happened, a new dawn of psychedelic tinted rock has arisen in that time and permeated the fuzz'n.roll of the stoner/hard rock scene seeing bands like Wo Fat, Earthless and others stretching out their raucous grooves into extended jams and experimenting with lysergic textures and hues. This recent development has not been lost on La Iglesia Atómica, the band have always had a leaning towards the psychedelic and so have embraced these new freedoms filling out their grooves with a myriad of bright colours and darkened shades. This might not seem so evident on the albums opening track "Cadavar Exquisito" the songs low,slow and heavy groove, embellished with swathes of textured keyboard colouring beneath which slow pounding drums beat out a ponderous rhythm, is more akin to doom than it is psych but as the album progresses those lysergic elements gradually begin to take shape. "Resurrección" follows, built around Criollo's deliciously seductive bass line and Pérez jazzy percussive chops the song is taken to another level by Latimer's stunning guitar work, the guitarist laying down dark swathes of chordal sustain that hang momentarily in the air before being replaced by more, giving the song an almost Floydian feel. The band have not discarded their stoner/hard rock roots entirely though and on songs like "Superhombres", "Mala Semilla"" and "La Mala Viene" they revisit those roots with fuzz drenched riffage, thunderous rhythms and soaring guitar solo's the foundations over which clean vocals and harmonies are sung (in Spanish). It is however when the band cut loose that the true beauty of what La Iglesia Atómica do becomes apparent, the band taking off on tangents into uncharted territories, improvising around a theme or a motif as on the wonderfully diverse and bluesy "Algo Habitual" and the excellently manic "Stoner Ball", the three musicians playing off each other, losing themselves in the music before gathering the threads together again and falling back into the groove, freedom and focus in equal measure

Twenty years ago La Iglesia Atómica called it a day, packed up their gear and went on to other things but now they are back .. ready to blend those old school stoner grooves of  their past with those newer sounds they have picked up along the way, let's hope its not another twenty years before the next album!
Check 'em out ...