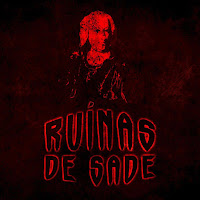 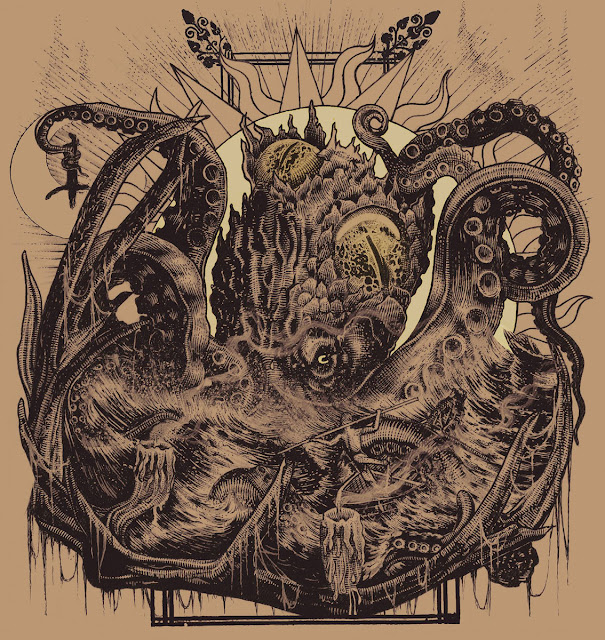 Let there be no doubt, Ruinas de Sade worship at the altar of the riff in the venerable Temple of Doom, be under no illusions that these guys are going to fill your head with pretty psychedelic colours and moments of ambient beauty these guys deal in the three D's... downtuned ,dirty and doom.
"Funeral do Sol" opens the EP and the listener is immediately struck by the depth and delicious doomy darkness of the bands sound, Zen's guitar and Machado's bass combine to create a huge wall of fuzz and distortion which is pushed from beneath by Gamba's versatile drum work. Grubert's delivers his vocals in Portuguese, a fact that does not, for an English speaking audience , detract in any way from their impact. He fills the spaces between the songs instrumental passages with powerful emotive tones, his voice conveying a sinister evilness that totally fits in with the bands sonic manifesto.
"Divindade Abissal" slowly rolls out on a groove that is almost "industrial" in sound, Machado's rumbling bass and Gamba's pounding drums creating a sound more akin to a foundry than the rhythm section of a doom band. Zen fills the gaps and crevices in this onslaught with droning guitar riffs and sinister solo's while Grubert intones mantra -like vocals overhead. It's powerful and a little malevolent.
"Cadavar de Terra"  finishes the EP with a Sleep-like heavy desert groove full of both subtle and brutal changes in tempo and dynamic. Vocals are a little more traditional in structure than on the previous tune and are supplemented with the use of spoken sections that help ramp up the brooding atmosphere of the piece. Zen's incessant guitar riff builds up the tension, a tension that is further enhanced by the solid and tight rhythms being created beneath him from the  bassist and drummer, he also takes the song to the fade with an incredibly tasteful solo that has more than a touch of bluesy swagger in its execution. 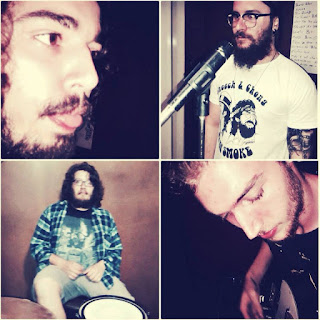 For those of you who are a little wary of listening to bands with  non-English vocal/lyrics suspend your prejudices and listen to the vocals as just another instrument, forget about the content of the lyrics and just dig the vibe and feel that is being portrayed. you might just find you open yourself up to a whole new world of music
Posted by Desert Psychlist at 15:30