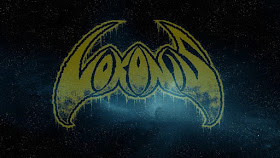 It was said in ancient times that all roads led to Rome but these days when it comes to the "underground" rock scene it seems that all those roads will eventually lead to Sweden.
Vokonis, a trio from Borås, Sweden, consisting of Jonte Johansson: bass, backing vocals.Emil Larsson: drums and Simon Ohlsson: vocals, guitars, are the latest in a long line of Swedish rock bands searching for recognition outside of their native country, a search that will surely reap dividends if their debut album "Olde One Ascending" is anything to go by. 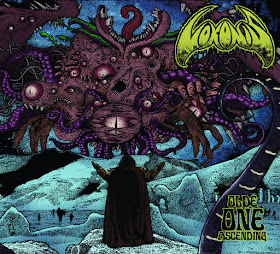 First track "Olde One" begins with an eerie reverb soaked guitar motif complimented by a deliciously sexy bass line and solid precise drumming, trance like and seductive it pulls the listener into a world of hazy dreaminess before shattering that illusion with a riff that could topple tall buildings. Johansson's bass and Larsson's drums build a huge wall of rhythm over which Ohlsson bellows throaty Lovecraftian lyrics of blood and evil as well as laying down heavy guitar riffage and searing solos. It's not subtle stuff  but it is effective and highly enjoyable
"The Serpent's Alive" begins with Larsson counting the song in, his crashing percussion heralding the start of another titanic riff. Ohlsson sings of "Serpents infesting your mind" while at the same time crunching out massive dark power chords laced with evil distortion and warm fuzz. Johansson's bass weaves in around these chords like the serpent in the songs title his bass complimenting and at times leading the riffs, Ohlsson then injects into this maelstrom a solo that is almost at odds with the raucous noise surrounding him, ripping sweet, almost, bluesy notes from his sweat drenched frets, soaring and swooping around the Sleep - like rhythms beneath him before slamming back into the songs main riff.and resuming his vocal. As the last note fades into the distance you have just enough time to catch your breath before we are off again..
"Acid Pilgrim" again draws Sleep comparisons with it's mid-paced, almost plodding, tempo. Lyrically we are back in Lovecraft territory with Ohlsson vocalising a paeon to the "Olde One". against a backdrop of throbbing bass and thunderous drumming that is broken intermittently by Ohlsson's catchy swirling guitar lick. At the 3:50 minute mark the tempo shifts into overdrive with Larsson  and Johansson driving the groove from beneath while Ohlsson channels his inner guitar hero with a blistering guitar solo.
"Shroomblade" enters on a wave of fuzz and distortion, the band jamming a slightly classic rock groove driven by Johansson's gnarly bass and Larsson's industrious drumming. Ohlsson's bellowed vocals then enter roaring the songs sparse but effective lyrics, The dynamic then shifts into a slighty jazzy mid-section, and a chance for the individual members to flex their musical muscles. Ohlsson rips another of his scorching Iommi influenced solo's from his six strings but it is Johansson's short but fluid bass solo that really catches the ear while underneath Larsson keeps the groove swinging channelling the spirit of the great Bill Ward with his jazzy chops. This is just a brief interlude and it's not long before the hammer goes down and we are back in stoner doom territory again.
"King Vokonis Plague" opens with a slightly odd lolloping riff that's not sure if its Sleep or Sabbath so ends up being pure Vokonis. A little more primal than previous tracks it trades heavily on its main riff and apart from another superb Ohlsson solo does not deviate far from its original starting point. It is for me the weakest track on the album but having said that a Volkonis weak track is better than some bands best ones..
"Hazmat the Ashen Rider" closes the album in fine style with the band firing on all cylinders, a bottom end heavy riff circling around Ohlsson's passionately bellowed and slightly monotone vocals. Around the half way mark Johansson and Larsson subtly shift gears into a slightly Eastern themed desert groove allowing Ohlsson space to peel off another of his furious solos, tone perfect notes oozing from his fingers. The band then return to the main riff and vocal before taking the song to its conclusion with a Sabbath meets Status Quo blues rock outro. Awesome stuff! 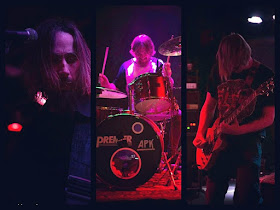 There is no hiding from the fact that Vokonis owe a huge debt to the monolithic grooves of both Sabbath and Sleep, taking the dark riff heavy desert/doom of the former and mixing it with the more traditional hard rock/metal of the latter, but they twist and weave these elements into a sonic tapestry that is completely and wholly their own.
Check 'em out...